Home > Coupe > 100 to zero: Inside the Brembo brake system of the Ford Mustang Shelby GT500

100 to zero: Inside the Brembo brake system of the Ford Mustang Shelby GT500

The 2020 Mustang Shelby GT500 will reach 100 mph in 10.6 seconds. Interestingly, this number is a two-way street. Drive the Shelby GT500 at 100 miles per hour and apply the brakes. You will return to zero again in 10.6 seconds. The first part is a 5.2-liter supercharged V8 with 760 horsepower. Brembo brakes are another matter.

Brembo brakes and performance cars are like Oreos and milk. It’s impossible to have one without the other. Brembo’s engineering and design teams often go to great lengths to match the braking system to the car in question. For example, Brembo developed a unique hybrid brake material for the 2019 Corvette ZR1 that withstands the higher temperatures caused by track driving. A year later, Brembo was at the drawing board with Nissan, devising a placement strategy for the cooling holes of the 2020 GT-R NISMO’s rotors.

“Automakers continue to push the limits of what is possible,” said Daniel Sandberg, President and Chief Executive Officer, Brembo North America. “Who could have imagined 10 years ago that the performance car segment would have cars with nearly 800 horsepower?”

Sandberg notes that as manufacturers (like Ford in this case with the Shelby Mustang) continue to push those performance boundaries, Brembo will do the same. “We will have to meet this challenge with advancements in metallurgy, production processes, disc technologies and – perhaps most importantly – friction material development,” he said.

Brembo has traveled down the road with the Mustang before. Fans may recall the 2000 SVT Mustang Cobra R, the fastest Mustang ever produced at that time. The 5.4-liter V8, developed by the Ford Special Vehicle Team (hence “SVT”), created 385 horsepower. The bright red rocket that was the Cobra R shot to 60 in 4.7 seconds and ran a quarter-mile in 13.2 seconds. Keeping it under control was Brembo’s responsibility.

The 2000 SVT Mustang Cobra R came with 13-inch Brembo vented rotors and four-piston aluminum calipers. At the time, a Motor Trend test determined the Cobra R went from 60 to zero in 109 feet or about 36 yards.

“The Brembo brand was built upon our close relationships with historic automakers such as Ford and iconic vehicles such as the Mustang,” Sandberg said. “After more than 20 years of supplying brakes on the Mustang, customers have come to know that when they buy a Mustang with Brembo brakes, they are getting an exceptional level of performance.” 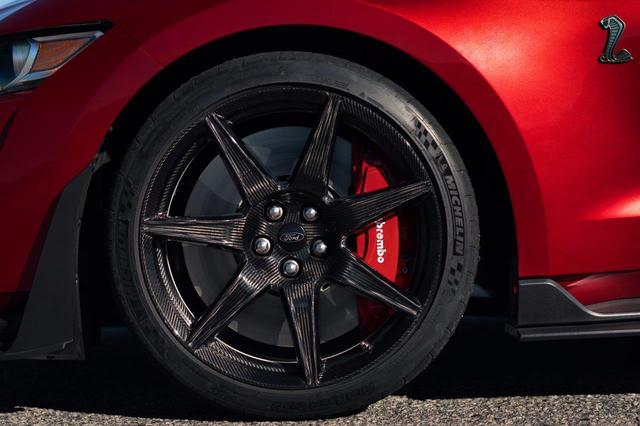 The 2020 Mustang Shelby GT500 comes with five different drive modes that change up the car’s personality. Among those drive modes are two that really make the GT500 sing: Track and Drag. In Track mode, the Tremec seven-speed dual-clutch transmission (it’s a wet clutch) changes its behavior to increase lateral grip through corners. Conversely, in Drag mode, the transmission employs “over-torque” shifts for better straight-line power delivery.

“In many ways, this is like having two transmissions in one,” explained Pat Morgan, Ford Performance Powertrain Manager. “On one hand, it enables performance at the outer reaches of straight-line quickness with minimal torque interruption, yet provides an incredible amount of finesse and control in track environments for maximum stabilit

y and predictability at the limits of lateral acceleration.”

Just as the Tremec transmission provides rapid (and massive!) power transfer from the 5.2-liter supercharged V8, it’s the Brembo brakes that provide balance and control. That’s not always easy to accomplish.

“When you’re developing brakes for a sports coupe with 760 horsepower, it’s an enormous technical challenge,” Sandberg said. “It’s a challenge to design a brake caliper that can handle the loads and temperatures that the brake system will experience.”

The front calipers are an aluminum monobloc design with six pistons. It’s one of the largest and highest-functioning units currently in Brembo’s portfolio. It needed to be that way, however. When attached to the Mustang Shelby GT500, the operating pressures can climb exponentially and cause a condition called caliper deflection, which sometimes feels like a “spongy” pedal.

“To combat this, we use the monoblock, single-piece casting concept, which is inherently stiffer than multi-piece designs,” Sandberg explained. “During the GT500 design phase, Ford was particularly focused on the caliper stiffness, so a monoblock was the only solution considered.”

“The caliper has a very large brake pad to handle the high temperatures, and the six-piston staggered-diameter layout ensures evenly distributed clamping pressure,” Sandberg said. “It’s important to be sure the pad material is doing equal work under braking, and that it won’t wear unevenly.”

Cars like the 2020 Mustang Shelby GT500 are the ones we often dream about driving. In my youth, I had posters on my wall at one point of nearly every popular performance car, the Mustang included. Even today, my office is decorated with auto show badges, vintage tin signs, and a healthy assortment of Hot Wheels.

Sometimes, for car enthusiasts, it’s all about these “feels,” as the younger kids say these days. Even when you’re not driving, you wish you were, so your personal space becomes an embodiment of this. Once behind the wheel, those positive vibes flow by way of a car that looks good, sounds good, and feels good.

“Every aspect of the Shelby GT500 driving experience changes with the mode – be that the throttle responsiveness and snap of the shifts you feel in the seat of your pants, or the ‘pop and burble’ of the exhaust in performance modes,” Morgan said. “It’s a full multisensory visceral experience.”

“Customers love the visceral feeling of the GT500’s acceleration, but if the brakes are not confidence-inspiring, it can ruin the whole driving experience,” Sandberg added. “By offering a Brembo system, Ford has ensured that the customer is equally awed by the stopping power of the vehicle.”