Home > New energy > Nissan e-4ORCE all-wheel: how it works and when we might see it

Nissan e-4ORCE all-wheel: how it works and when we might see it

Nissan 4ORCE system control Track
ZTSG 16/04/2022 New energy 104
We are all familiar with Nissan Leaf. We know that it is a high-tech and practical electric car, even if its design is a bit clumsy. Although the appearance is subjective, it is still not the most val...

We are all familiar with Nissan Leaf. We know that it is a high-tech and practical electric car, even if its design is a bit clumsy. Although the appearance is subjective, it is still not the most valuable from an enthusiast's point of view. But with the Nissan e-4ORCE system, the future Nissan EV is destined to have a brighter future in terms of safety, turning performance and driving comfort.

Or that is what Nissan is banking on at least . . .

What Is Nissan e-4ORCE?

All-Wheel Drive In An Electric Car?

Does It Make For a More Comfortable Ride?

What Nissan Vehicle is Equipped With e-4ORCE?

What Is Nissan e-4ORCE?

Nissan e-4ORCE is an all-wheel control technology based on a dual-electric motor setup. The Japanese carmaker demonstrated this new electric all-wheel drive (AWD) system using a Leaf e+ test car during the Tokyo Motor Show in 2019 and CES in Las Vegas earlier this year.

“This technology offers a new level of control,” said Ryozo Hiraku, leader of Nissan’s powertrain and EV engineering division. “e-4ORCE control technology is not a successor of one, but an evolution of many.”

Electric vehicles deliver instantaneous torque. But with the more direct application of how much power arrives at each wheel, Nissan’s e-4ORCE is unlocking the potential of a sportier-handling EV, one that behaves similarly or better than a conventional gasoline-powered car with a mechanical AWD system.

All-Wheel Drive In An Electric Car?

Sure why not! If we can have AWD in a gasoline car, or the Toyota Prius, why not in an EV? In Nissan’s case, having an electric motor on the front and rear axle means having the ability to divert more or less torque between those axles. Having four spinning wheels instead of two means better handling and traction when the weather is bad and stronger acceleration on dry pavement. 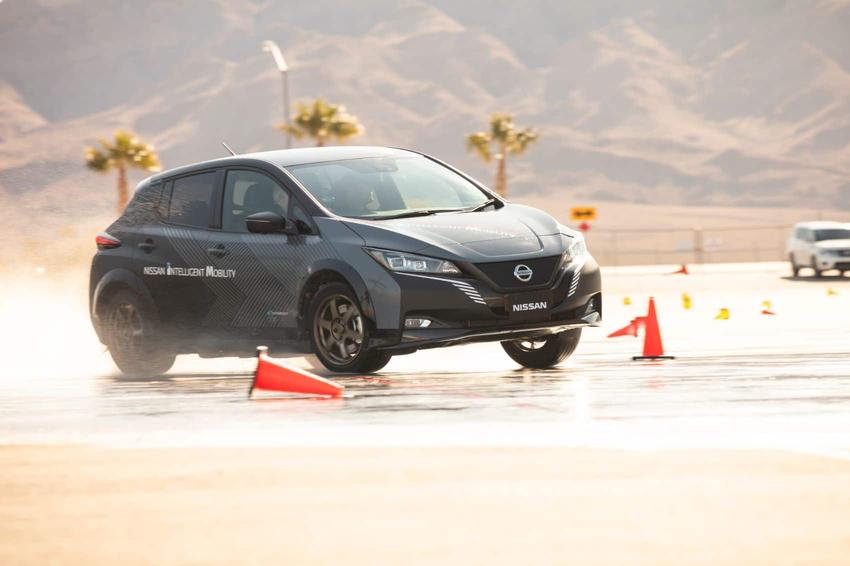 “e-4ORCE’s control technology stands out from other EV all-wheel systems available today,” Hiraku continued. “We performed extensive fine-tuning to deliver precise performance that supports the driver’s intentions for an enjoyable drive under a wide variety of conditions.”

Nissan e-4ORCE is a culmination of the company’s extensive know-how from the Patrol’s intelligent 4×4 system and the ATTESA E-TS torque vectoring system of the Nissan GT-R. The latter, in particular, stands for Advanced Total Traction Engineering System for All-terrain with Electronic Torque Split (say that 10 times fast!). The system is mainly responsible for the GT-R’s all-conquering track prowess.

Tesla’s Track Mode V2 is standard on the Model 3 Performance. Basically, Track Mode offers torque vectoring by shuttling power between the front and rear axles to improve cornering. In version 2 of Track Mode, drivers are allowed to adjust how much torque is sent to each motor to customize the understeer/oversteer behavior of the vehicle.

Additionally, Track Mode V2 can shift the motor bias from 100 percent front to 100 percent rear given varying scenarios. However, Track Mode V2 is only suitable for racetracks and autocross courses. In short, you can’t use it on the street.

Meanwhile, Nissan e-4ORCE works similarly. The default setting is a 50:50 front to rear torque split. As you drive, the system can transfer 100 percent to the front or rear wheels or anything in between. With the combined prowess of hydraulic and regenerative braking, the system maximizes traction during cornering by applying individual braking forces to slipping wheels. This allows for better control over slippery, wet, icy, or even snowy pavement.

Does It Make For a More Comfortable Ride?

Since Nissan e-4ORCE manages both power distribution and braking, the system ensures maximum comfort by using the front and rear electric motors to eliminate pitch and dive upon deceleration. “By taking advantage of e-4ORCE’s precise motor control response, we’re able to control vehicle motion as soon as the brakes are applied, giving all occupants – especially passengers – a stable, smooth ride,” Hiraku added.

And if the driver happens to apply too much power (or steering correction) upon entering a corner, for instance, e-4ORCE can manage the output and point the car in the right intended direction. All of this happens unobtrusively without the driver knowing it.

“We developed this technology to work in the background and not disrupt the driver,” Hiraku explained. “Once people get used to a car with e-4ORCE, they may find it surprising to drive a car without it.”

What Nissan Vehicle is Equipped With e-4ORCE?

Nissan is in the final stages of development currently. We reckon e-4ORCE will make its first commercial appearance in the production version of the Nissan Ariya Concept, which we’re expecting to debut in 2021. Purportedly equipped with dual electric motors and all-electric propulsion, the Ariya is a prime candidate for Nissan’s e-4ORCE all-wheel control system.