Faster Bascomb car
ZTSG 26/01/2022 Sedan 239
By the 1930s, cars funded by the Nazi German government had dominated the track.At the behest of the French government, an unlikely group emerged as a possible challenger.Our Book Garage series showca...

By the 1930s, cars funded by the Nazi German government had dominated the track.

At the behest of the French government, an unlikely group emerged as a possible challenger.

Faster by Neal Bascomb chronicles one of the most inspiring, death-defying upsets of all time: a symbolic blow against the Nazis during history’s darkest hour.

A pre-publication copy of Faster arrived in the mail recently. I only had a vague idea of what it would be about, but when I noticed the cover had a couple of pre-war cars, my interest was piqued. Often called “the golden age of auto racing,” that era has always fascinated me.

If not done right, car books can become bland, coffee table affairs that simply collect dust. Faster is most definitely not one of those, but honestly, it took me a while to figure out where Bascomb was going with his book. I was merrily reading along, enjoying myself, when I realized I wasn’t really thinking about fact checking what Bascomb was writing. It all more or less jived with what I know about pre-war racing, which, honestly, is a lot.

I’ve read a ton of books on the period, everything from Chris Nixon’s definitive Racing the Silver Arrows to Count Giovanni Lurani’s Nuvolari!, and nothing in Faster stuck out or caught me as a hiccup. That’s a good sign. No embellishment, no downplaying or elevating facts, just sticking to the story.

Which is a smart idea, because the story told in Faster is a doozy. It’s not just an overview of racing in the 1930s with a few pictures and info sidebars. Instead, Faster is the intimate story of Lucy Schell, Rene Dreyfus, and a Delahaye 145. Ultimately, it’s the story of two people and one car facing insurmountable odds.

In 1936, although concerned about a looming war with Germany, the French government and the Automobile Club of France offered an unprecedented prize of one million francs (or Prix du Million, as it was called) to any driver or team that could top the speed records of the German cars. There must be somebody, surely in all of France, who could design a car to beat Hitler. And that was the ultimate goal: to halt Nazi Germany’s dominance of Motorsport (and the protagonists of Faster end up doing that).

The timed run was scheduled for late August 1937 at Autodrome de Montlhéry. Every car that entered had to last 16 laps (about 120 miles) at an average speed of at least 91 mph. Think about this for a second: this is the same track where Antonio Ascari was killed in 1925, so there was risk trying to set speed records at such a place. Despite the risk, if you win, you get one million big ones. That’s a heck of a way to get people interested. People like Lucy Schell for instance.

Schell is the mom of Harry Schell (50s racer), wife of Laury Schell (also a racer between the wars), and a damn quick competitor herself (she nearly won the Monte Carlo rally a bunch of times). She was also the financier and team boss of L’Écurie Bleue. How many women do you know today that pay for and run their own Grand Prix team? 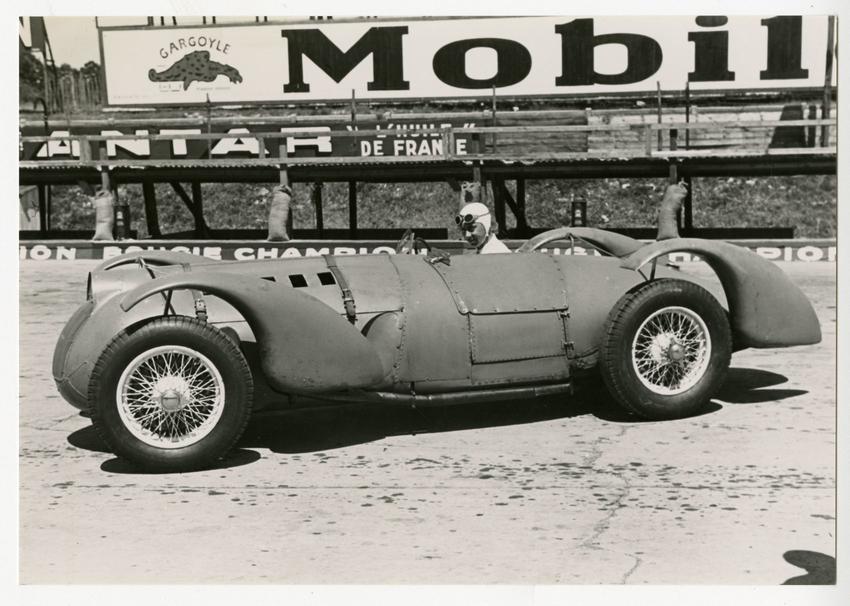 Exactly. Lucy Schell was not to be trifled with.

Rene Dreyfus was a racer of no mean ability, victor in a number of different categories and, for the purposes of this story, a guy in search of a good ride for the F1 season (the usual story for a driver, even today). Yet Dreyfus and his story differ a bit considering the time. You see, he was Jewish and shunned from the top racing teams because of it.

The Delahaye 145 was a car no one expected Delahaye to build, let alone run in the current Grand Prix. Delahayes were nice, no two ways about that; but they were a company of staid, rather old fashioned sedans, not sports cars and certainly not Grand Prix cars. It would be like Kia suddenly fielding an F1 car against Mercedes-Benz and Ferrari (although they did surprise us with the Stinger,

so who knows). But that’s the idea: it would take everybody by surprise, which Delahaye most certinately did.

Charles Weiffenbach, then head of Delahaye, was desperately trying to save his company as tensions across the globe were rising prior to World War II. Weiffenbach wasn’t alone either. Bugatti, Talbot Lago, and Renault had joined hoping to claim the prize money. Dreyfus would later quip that the Delahaye 145 was the ugliest car he ever saw, but that didn’t stop him from nearly driving the Dunlop tires off the thing during the timed competition.

That’s the mix of the protagonists in Faster, and the antagonists really couldn’t be any more antagonistic: Nazis. By 1937, Adolf Hitler had risen to power and was channeling the narrative that would lead to World war II. Militaristic, controlling, grasping, and virulently racist, the Nazis didn’t think they were better than everybody else; they knew they were. They were, literally in their minds, the master race. Everybody else was biologically inferior to them and, in a lot of cases, downright sub-human.

Hitler was showing off German prowess in a number of ways: better planes, better factories, better sports figures in the Olympics (although Jesse Owens would prove otherwise in 1936), and most definitely better cars. Hitler personally ordered the party to bankroll both the Mercedes-Benz and Auto Union Grand Prix racing efforts. There were few who would argue against them at the time. Mercedes-Benz and Auto Union were kicking Hintern and taking Namen.

And who was this group to challenge Nazi Germany, the million francs aside? A struggling car maker, a Jewish driver, and an American woman? Against the government-sponsored racers of Nazi Germany? That, as they say in the drama business, is just “the set up” for Neal Bascomb’s Faster.

The narrative clips right along, never getting bogged down with technical stuff, nor glossing over what the engineering was. Bascomb shows us the personalities but never delves into melodrama. The Nazis are there, but they’re not cardboard cutout bad guys. Bascomb handles them as they really are, a slowly creeping menace that seem laughably ignorant and grossly buffoonish until they’re marching down The Champs-Élysées and pushing innocent people into gas chambers.

Later on, when France fell to German occupation, the Million Franc Delahaye was disassembled, hidden, and buried to prevent it from being destroyed by the Nazis who wanted to erase any memory of it from history. Thankfully they did not succeed.

Faster is an interesting book in how it frames this remarkable underdog story. Normal people will be enlightened by it, history buffs will appreciate it, and gearheads and car enthusiasts will love it. So, if you fall into either of those groups, make Faster the next book you read.

Neil Bascom is the author of ten awards-winning Domestic and international bestsellers, including the recent "Prison Break Artist", which is the greatest escape story in the history of war. Prior to this, he wrote the New York Times best-selling book on the destruction of the "Winter Fortress" of the German atomic bomb project. Bascom’s work has won awards, has been selected as a film and documentary, has been ranked among the best books of the year, and has been translated into more than a dozen languages. As a former international journalist and book editor, he also writes for the New York Times, The Wall Street Journal and the Los Angeles Times.