The 2022 BMW Alpina B8 Gran Coupe follows the same familiar formula that the company founder Burkard Bovensiepen concocted in 1962. But unlike Gordon Ramsay’s signature beef Wellington dish, Alpina’s recipe is relatively simple: buy a BMW, make it run faster, stop harder, and turn on the track like Charlie Sheen.

In this case, Alpina opted for a “standard” BMW 8 Series Gran Coupe (yes, the one with four doors), took it to Buchloe, and never looked back. Fresh from the warm North American reception of the Alpina B7 sedan and XB7 SUV (or SAV as BMW likes to call it), the B8 Gran Coupe looks like a worthy third hurrah. One thing is for sure, though: The new Alpina B8 Gran coupe will bring a silly grin to the faces of drivers who have the means to purchase a $140,000 luxury-performance sedan.

BMW Alpina B8 Gran Coupe: Down to Business

BMW Alpina B8 Gran Coupe: Down to Business

Alpina’s story began in 1962 when a young Burkard Bovensiepen bought a BMW 1500. The car had a four-cylinder engine with around 80 horsepower. Discontented with the engine’s lethargic output, Bovensiepen got rid of the old carburetor to make room for Weber dual carburetors. The result was 96 horsepower, impressive for its time. The car was so remarkable that BMW sales boss Paul Hahnemann convinced the brass to certify Alpina vehicles with BMW’s factory warranty.

In the 2022 B8 Gran Coupe, Alpina fettled with the standard 4.4-liter bi-turbo V8 and didn’t stop until reaching 612 horsepower and 590 lb-ft. of torque, the latter arriving as early as 2,000 rpm. It has more power than a BMW M8 Gran Coupe, but five fewer horses than the hotrod M8 Gran Coupe Competition.

Still, we’re talking about a blinding quick four-door sedan. The Alpina B8 rushes to 60 mph in 3.3 seconds with standard all-wheel drive and a modified eight-speed M Steptronic transmission with paddle shifters. It achieves the quarter-mile run in 11.5 seconds, and it has a top speed of 201 mph. Whoopee!

After completing the “make it go faster” part, Alpina gave the B8 Gran Coupe an active sport exhaust system with two modes. Comfort mode enables the car to be as meek as a mouse, but Sport mode unleashes the Pavarotti within. We like the fact you only have two exhaust noises to choose from with nothing in between. 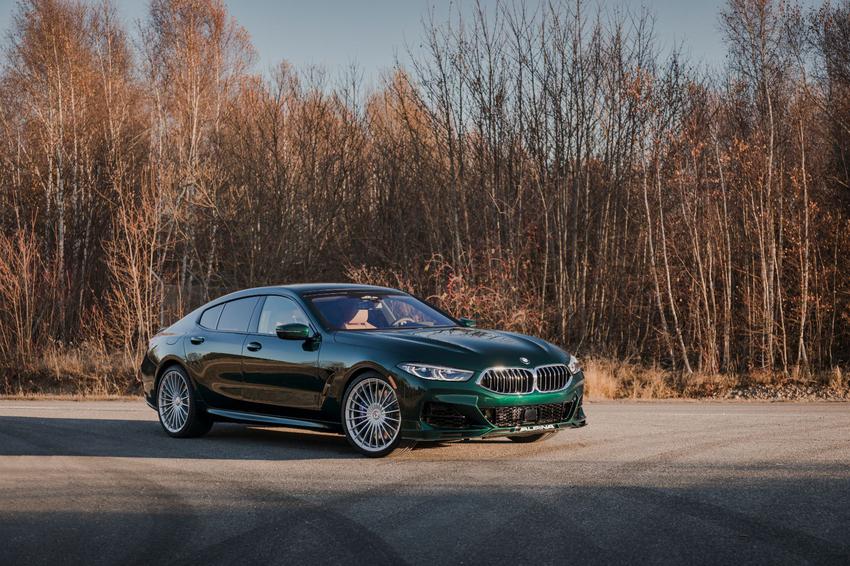 At the front, it gets Eibach springs and axle struts with hydro mounts to draw the fine line between a cozy ride and taut handling. It also has reinforced sway bars, stiffer wishbone mounts, and a ZF active rear steering system to improve cornering. The latter pivots the rear wheels to a maximum of 2.3 degrees, turning opposite the front wheels at low speeds and in the same direction at higher speeds to improve cornering

As a bonus, the Alpina B8 has a standard limited-slip rear axle differential, the kind you can use to execute awesome powerslides, but you didn’t hear that from us. Ensuring maximum traction and grip are bespoke Pirelli tires on forged 21-inch multi-spoke Alpina wheels. If you think that’s excessive, Alpina has 20-inch forged wheels with standard all-season or winter tires. If you choose the smaller wheels, the top speed goes down to 168 mph.

Speed is always part of the equation, but how fast you stop matters as much in high-performance driving. Alpina knows this well and is taking no chances with its B8 Gran Coupe. It has four-piston fixed Brembo brake calipers grasping 15.6-inch disks on the front with floating brake calipers and 15.7-inch disks on the rear. Of course, the B8 Gran Coupe has blue racing calipers as any Alpina should.

Unlike other tuned German cars, the 2022 BMW Alpina B8 Gran Coupe’s styling is an exercise of restraint, and it suits the 8 Series quite well. It gets unique front and rear aprons and a minimalist ducktail rear spoiler, and that’s it. If we’re buying, the Alpina Green Metallic paint is our choice of color, but the Blue Metallic is not bad, either. If you prefer to forge a different path, the B8 Gran Coupe is available with more traditional paint colors.

Inside, the 2022 BMW Alpina B8 Gran Coupe has standard Merino leather seats, high-gloss walnut trim, and an Alcantara headliner. BMW’s iDrive rotary controller is still there, but it now gets a crystal glass knob with a laser-etched Alpina logo. It has a panoramic glass roof, heated and ventilated front seats, quad-zone climate control, a heated steering wheel, heated rear seats, a full-color heads-up display, and adaptive LED headlights with Laserlight.

BMW’s iDrive 7 is standard, along with a 10.25-inch touchscreen display and a 12.3-inch digital instrument cluster. You also get WiFi hotspot connectivity, Apple CarPlay and Android Auto, and a Harman Kardon surround sound system.

On the safety front, the newest BMW Alpina B8 Gran Coupe has a concoction of active safety features like lane departure warning, frontal collision warning, and automatic city collision mitigation with dynamic braking, to name a few.

Alpina’s newest B8 Gran Coupe is landing at U.S. dealerships later this spring and has base prices starting at $140,000, about 10 grand more than a stock BMW M8 Gran Coupe.