Infiniti uses Q60 Sports Coupe as the cornerstone of its brand

Infiniti today unveiled the new Q60 sports coupe at the 2016 North American International Auto Show in Detroit. The Q60 is faithful to the original concept of body lines, angles and overall styling shown at NAIAS last year. Carlos Ghosn, President and CEO of Nissan Motor Co., Ltd., took the stage, and the car was launched again this year, but with a wider range of uses.

“As the third-generation version of Infiniti’s iconic sports coupe, the new Q60 builds on Infiniti’s brand heritage and history of technology leadership,” he said.

“I want to congratulate Infiniti’s leader and the entire Infiniti team on a job well done,” he said.

The premiere of the new Q60 sports coupe comes on the heels of rapid growth for Infiniti. Annual sales, for the first time, surpassed 200,000 units. Records were set in Western Europe, Asia, and Australia, while in China, Infiniti was the fastest growing premium brand. The United States, Infiniti’s largest market, increased 14 percent to 133,500 units.

“Instead of celebrating these records, we’re focused on shattering them,” Ghosn said.

In a product offering that will include 4 sedans and 5 crossovers/SUVs by mid 2016, The Infiniti Q60 is expected to further drive sales.

“The Infiniti Q60 conveys a powerful elegance through its daring design, next-generation ride and handling technologies, and powertrains offering up to 400 horsepower,” Ghosn said. “ 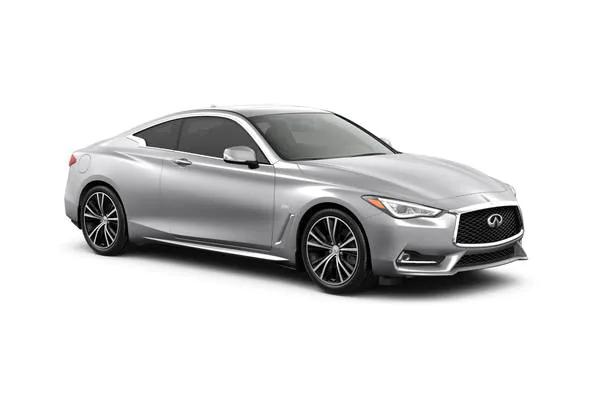 The Q60 will attract new customers to the Infiniti brand and affirm our position in the sports coupe segment.”

A turbo charged, 3.0-liter V6 from the new VR family continues the brand’s longstanding heritage of six-cylinder powertrains. The new V6 comes with two ratings: 300 or 400 horsepower, with the latter offering one of the best power-to-efficiency ratios in the sports coupe class. Dynamic Digital Suspension, engineered for sharp handling, quick response, and superior ride is optional.

Power is sent to the rear wheels, although all-wheel drive is available.

Upgraded versions of the Q50 sports sedan and the QX60 crossover accompanied the QX60 sports coupe on stage. Ghosn also touched on some future plans for Infiniti.

“In the second quarter of this year, we will begin sales of the QX30 crossover in North America and Europe,” he said. “You will also see a range of new powertrains as well as mid-cycle enhancements of existing vehicles.”

The Infiniti dealership network is expected to expand to more than 500 locations worldwide too.

“Infiniti has everything it needs to be a major competitor in the premium segment: the right products, the right strategy, the right leadership, and the right vision,” Ghosn said.

What do you think of the Q60 Sports Coupe?

*Carl Anthony is Managing Editor of Automoblog.net and resides in Detroit, Michigan.