Honda 2017 power Touring engine
ZTSG 20/09/2022 Suv 76
2017 Honda CR-VProsRoomyCargo CapacitySafety FeaturesConsParking Brake95AWESOMEFor years, the Honda CR-V has been one of those vehicles that just blended in with all the other small crossovers on the...

For years, the Honda CR-V has been one of those vehicles that just blended in with all the other small crossovers on the road. Gone are those days forever, now that the 2017 CR-V has arrived. Honda has fully-redesigned the popular model and it gets more comfortable, more fuel-stingy, and more versatile. The exterior has also been completely restyled and is now more attractive and modern looking.

The Honda CR-V is completely redesigned for 2017. The outside gets a much-needed styling update, it gets a longer and wider wheelbase, and the addition of an optional, 1.5-liter turbocharged four-cylinder engine that should improve fuel economy and acceleration. We checked both of those out this week. 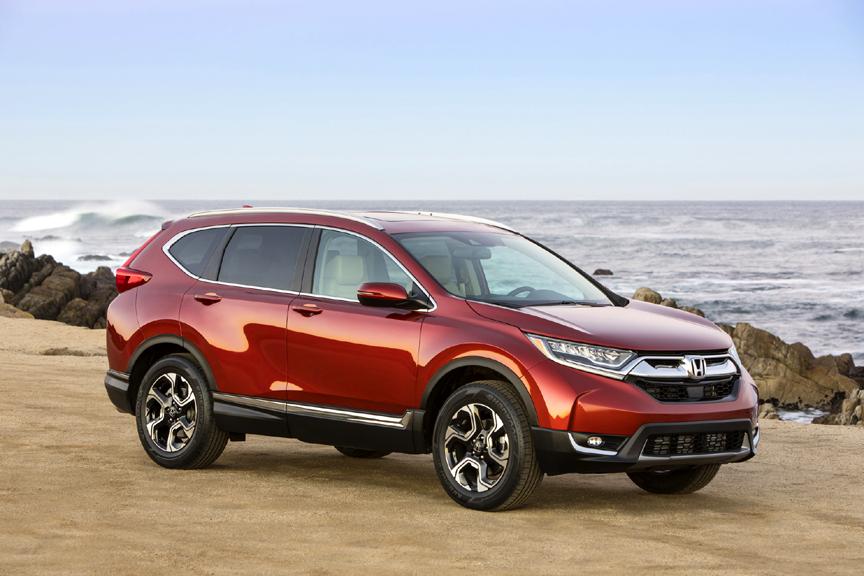 Honda did not have pricing yet on this CR-V pre-production model.

The cabin in the 2017 CR-V is updated with new materials which look classy for the segment. The interior gets a bit bigger with the wider and longer wheelbase, allowing even more room for passengers in the front and back. Up front, the gearshift gets moved further forward and higher on the center console, allowing for abundant storage areas. There’s multiple handy trays and storage bins for families to easily hide all their stuff, keeping the front uncluttered. We also liked the top-of-the line Touring model inside with its wood-grain trim, and the leather-wrapped steering wheel, gear shift knob, and seats.

Drivers will definitely appreciate the added adjustability that comes with the 12-way power driver’s seat. We could easily find the perfect driving position for superior visibility. We especially liked the re-introduction of a volume knob for the audio system on the CR-V’s center console. It’s one of the things Honda listened to as there were many complaints about the touchscreen volume controls on previous CR-Vs. It makes it much easier now to crank up the tunes.

Out back, there’s even more room for rear passengers. Our riders this week commented on the ample leg and headroom as we traveled for a lunch meeting. Behind the rear seat, the CR-V offers up one of the most user-friendly cargo areas in the small SUV segment with 39.2 cubic feet of cargo-carrying ability. There’s also a deep cargo area and lower load floor making it easier to load bigger cargo items. The Touring’s power lift gate comes with a handy hands-free option and a height-adjustment feature.

The 2017 Honda CR-V gets a new 1.5-liter turbocharged four-cylinder engine rated at 190 horsepower and 179 lb-ft. of torque. It comes mated to a continuously variable transmission (CVT), and our Touring tester came with optional all-wheel drive.

EPA fuel mileage estimates are 27/33 city/highway and 29 combined mpg. We averaged 28.2 mpg for the week which was at altitude, plus we pushed the crossover hard.

This Touring model came fitted with the new turbocharged 1.5-liter four-cylinder engine. When we first looked at the size and horsepower, at least on paper, it didn’t seem like an upgrade with more power. It seems undersized for the vehicle, but the turbocharger totally changes the dynamics of this engine. We pushed the new CR-V hard all week at altitude in the mountains west of Denver, and the 1.5-liter mill never lacked for power.

We drove it up I-70 into the mountains and we had all the power we needed to stay in the fast lane and pass slower traffic. In the city, the CR-V handles like a champ as we were able to scoot in and out of traffic. The ride is smooth and composed, even over rough pavement. The cabin is quieter than the previous model; we were able to crank up the premium sound system and enjoy the ride.

The CR-V is a great city commuter that’s the perfect size for a new or smaller family. It’s roomy enough inside and never left us feeling tired at the end of the day. Visibility is good and the tilt-telescoping steering wheel along with the 12-way power driver’s seat is extra convenient on long trips. The only complaint is that the parking brake sets itself when you shut off the engine. When you get back in, you have to release the brake or you don’t go anywhere.

Overall, the newly-redesigned 2017 Honda CR-V is good-looking and comfortable. The new fuel-efficient 1.5-liter turbo engine has plenty of power for most driving situations. The all-wheel drive makes it an all-weather cable crossover with plenty of utility. For more information on the new CR-V, look through our detailed Product and Performance Overview here.