No dad! 2020 Dodge Durango SRT gets a new exterior kit

Durango SRT Black Dodge Redline
ZTSG 01/10/2022 Suv 64
2020 Dodge Durango SRT adds more customization options through the new black kit.A sleek Redline stripe can be added to the SRT which runs the length of the Durango.The Durango is not your average SUV...

A sleek Redline stripe can be added to the SRT which runs the length of the Durango.

The Durango is not your average SUV, with the SRT trim approaching 500 horsepower.

Sometimes, SUVs and crossovers get classified (this also happened to minivans) as the “dad bod” of vehicles. There is that sad story of a guy; the one who trades his hot convertible, boss off-road truck, sports and/or muscle car for something with three-rows and a rear-seat entertainment package. Such a visual could easily become a Bill Burr skit about how this particular guy has nothing now to really look forward to.

However, there are SUVs and crossovers, and then there is the Dodge Durango.

The Durango can haul the family, haul the mail, and it even has those rear DVD players. And for 2020, the Dodge Durango SRT comes with a new appearance package and special Redline stripe to help chisel up that body a little more. SUVs and crossovers may have their stereotypes, but the Durango tends to easily break that mold.

2020 Dodge Durango SRT: By The Numbers

What Is The Durango SRT Black Package?

What Is The Redline Stripe?

There Are Other Durangos Too

2020 Dodge Durango SRT: By The Numbers

Under the hood is 392 cubic-inches of spitfire and freedom pushed through a burly exhaust. The 6.4 Hemi V8 produces 475 horsepower and 470 lb-ft. of torque, sending the Durango SRT to 60 mph in 4.4 seconds. As certified by the National Hot Rod Association, the 2020 Dodge Durango SRT runs the quarter-mile in 12.9 seconds. Away from the track, the Durango SRT hauls a maximum of 8,700 lbs. when properly equipped, plenty for a weekend outing to the lake.

Related: A complete look at the 2020 Dodge Charger lineup.

To help balance all that juice, the Durango SRT comes with all-wheel drive, a special Active Damping system, stiffer front and rear springs, and Brembo brakes. The Brembo system consists of six-piston front calipers, four-piston rear, and vented rotors at all four corners. Like true performance vehicles often do, the 2020 Dodge Durango SRT has a 50/50 weight distribution.

“The numbers tell the story,” explained Tim Kuniskis, Global Head of Alfa Romeo and Head of Passenger Cars – Dodge, SRT, Chrysler and Fiat, FCA – North America. “As Dodge performance enthusiasts move through the Durango lineup to the fastest, most powerful, and most capable American three-row SUV, they want their vehicle to stand out in a crowd.”

What Is The Durango SRT Black Package? 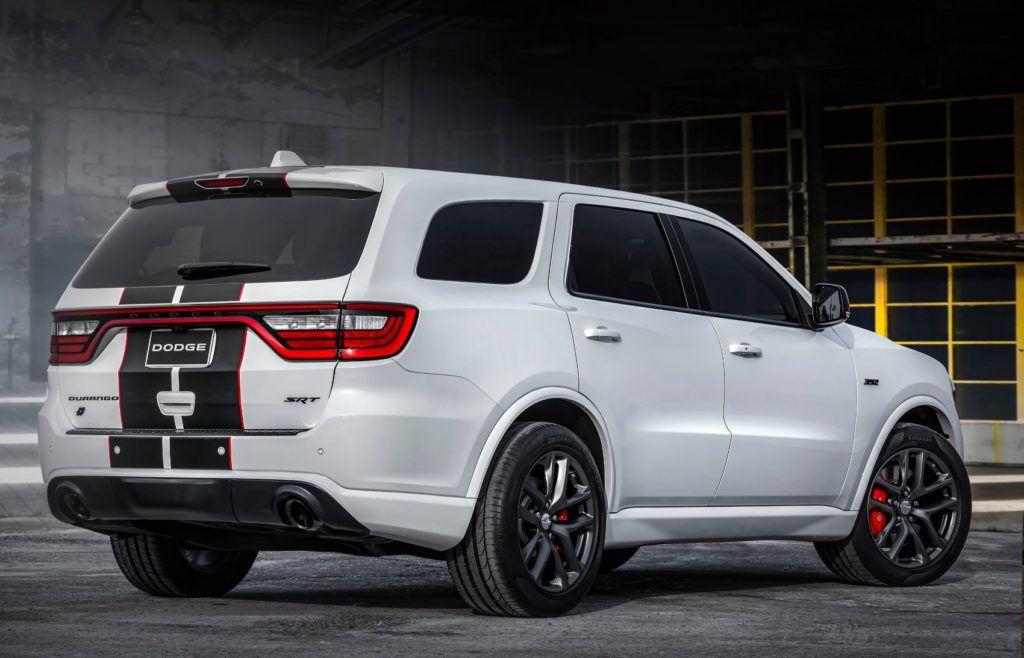 20-inch by 10-inch Matte Vapor wheel (Brass Monkey wheel can be optioned at no cost).

What Is The Redline Stripe?

Available on the Durango SRT, the new Redline stripe is a full-length, Satin Black center stripe with Redline Red accent tracers on each edge. The Redline stripe retails for $1,295.

The Dodge Durango SRT Black package and Redline stripe join four other available appearance options, plus five stripe options for the Durango based on trim level.

There Are Other Durangos Too

Buyers can have a Durango with a more “sensible” package. Available for the 2020 Durango is the famous 5.7-liter Hemi, complete with cylinder deactivation to save fuel under light throttle demands. With 360 horsepower and 390 lb-ft. of torque, the 5.7 Durango can tow 7,400 lbs. when properly equipped. By comparison, the standard 3.6-liter Pentastar V6 generates 293 horsepower and 260 lb-ft. of torque. Max towing is still a healthy 6,200 lbs. when properly equipped.

The Dodge Durango SRT Black with the Redline stripe will be available for dealer orders in March.