Syclone Camaro GMC Vigil 1991
ZTSG 05/04/2022 Truck 169
Every once in a while, you will meet people who are good at thinking about problems. This is the case with the team from GMPArtsOnline.net, who stepped out of the left-hand field with one of the most...

Every once in a while, you will meet people who are good at thinking about problems. This is the case with the team from GMPArtsOnline.net, who stepped out of the left-hand field with one of the most interesting comparisons we have seen.

“We were talking about our favorite vehicles one day at work when someone mentioned the Syclone,” recalled Angel Vigil, Director of GMPartsOnline.net. “Then we had an argument about whether or not the Syclone was faster than a new Camaro.”

From the onset, it doesn’t seem like much of a debate but looks are deceiving. The Camaro, despite modern technology and advanced aerodynamics, only hits 60 mph two tenths of a second quicker than the old Syclone. This lead Vigil and his team to wonder: if the Syclone had the advantage of GM’s newer powertrains, would it be able to best the Camaro?

“The truck was obviously very fast, but the turbo 4.3-liter is a very special engine,” Vigil said. “You can’t find it in any other GM vehicle, other than the Typhoon.”

The Typhoon, like the Syclone, was a short-lived performance version of the GMC Jimmy. The Typhoon ruled the streets from 1991 to 1993, whereas the Syclone saw only one year and one color: 1991 and black.

“The truck was very expensive, and it was a hard purchase to justify if you didn’t love the idea of owning a hot rod pickup,” Vigil explained. “I always wanted one when I first heard about them, but like most people, I suppose I wasn’t in a position to buy one new.”

To this day, the 1991 GMC Syclone is one of the quickest production trucks ever built. Interesting enough, the Syclone was actually born a Buick when, after the Grand National was halted, engineers from the program stuffed the car’s 3.8-liter plant into a Chevy S-10. Billed as the Grand National Pickup, it was presented to GM brass but they were hardly enthusiastic. 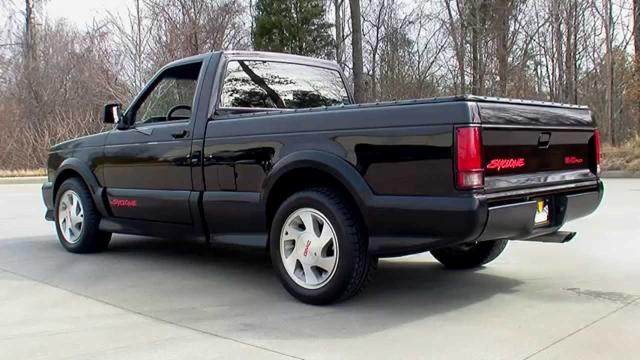 After putting the brakes on the Grand National car, they had other plans for Buick. A performance-oriented truck was not in the cards.

The team then approached Chevrolet’s management, but they already had the 454 SS Sport Truck and were not taking any chances. According to veteran automotive journalist Marty Schorr, the Buick Grand National was stealing the Corvette’s thunder at the time. Schorr detailed the story for us earlier this year, revealing how a bumper sticker for the Grand National that read “we brake for Corvettes” caused a lot of headache for Chevy officials.

It was unlikely Chevy was going to be outdone by Buick again.

This left GMC who immediately jumped at the opportunity.

The all-wheel drive system that propelled the Syclone was ahead of the curve too. With an advanced viscous-coupled center differential and limited slip rear differential, power could be split 35/65 front to rear for maximum traction. GMC’s tiny hurricane rode on 16×8-inch aluminum wheels with 245/50/16 Firestone Firehawk tires.

“The heritage is probably the thing I love the most about the Camaro, but the car has real race credibility too,” Vigil said. “And the 6.2 V8 is awesome.”

It’s hard to say what would have become of the GMC Syclone had it survived the early 90s, but Vigil has an idea.

“If GM wanted to take the Colorado or Canyon and offer the twin-turbo 3.6-liter used in the Cadillac CTS, that would be a 420 horsepower engine that would probably fit in the engine bay,” he said. “That truck would run with a new Camaro SS too I suspect, only it would weigh 500 lbs. more than the Camaro SS.”

The chart from GMPartsOnline.net comparing the Syclone and Camaro is below.. Although it has already been sold, RK Motors Charlotte has some stunning photos of a 1991 GMC Syclone, including pictures of the truck’s window sticker and owner’s manual.

The Syclones were produced only sparingly before being sent to pasture; the Camaro celebrated 50 years in 2017.

“There were only about 3,000 of them made,” Vigil said. “They’re highly collectible.”

Carl Anthony is the executive editor of Automoblog and lives in Detroit, Michigan. He studied mechanical engineering at Wayne State University, is a board member of the Ally Jolie Baldwin Foundation, and is a big fan of the Detroit Lions.