pickup Ford Maverick bed storage
ZTSG 13/08/2022 Truck 99
Not long ago, this writer wrote an article about the arrival of "mini-pickup trucks" in the North American market. Well, this is a re-arrival because manufacturers have long been talking about launchi...

Not long ago, this writer wrote an article about the arrival of "mini-pickup trucks" in the North American market. Well, this is a re-arrival because manufacturers have long been talking about launching a truck that is lower than the Ford F-150 and Chevrolet Silverado to attract CUV and SUV customers. The thing is, I commented in the story that the trucks released by these manufacturers to fill this gap did not perform well because they were either too big or the engine too big.

Well, that’s all about to change. We’ve recently seen news about the impending arrival of the Hyundai Santa Cruz “sport adventure vehicle”. And now – as I previously surmised – it’s official: the Maverick name is back at Ford, and it’s a pickup.

Based on the Bronco Sport CUV (which itself shares many bits with the Escape), the Maverick comes in three trims, starting at $25,900 – XL, XLT and Lariat – and standard with a hybrid powertrain good for 162 horsepower and 155 lb-ft of torque with front-wheel drive. That can be upgraded to a 2.0-litre EcoBoost turbo (250 hp, 277 lb-ft of torque) that also adds AWD. Transmission duties are handled by an eCVT in the hybrid and eight-speed automatic in the non-hybrid.

The AWD version can tow up to 4,000 lbs, while the hybrid is no slouch in this regard as it can tow 2,000 lbs, which is the same the gas truck can tow if you don’t opt for the heavy tow package. It comes only as a four-door cab (that’s larger inside than the Escape) and with a 4.5-foot bed.

According to Ford, the goal was to offer the maneuverability and fuel economy of a smaller vehicle, but with the capabilities of a pickup. Indeed, it sounds like that’s what’s required if they hope to reach those customers that had previously been looking at more common vehicle segments for their next purchase. 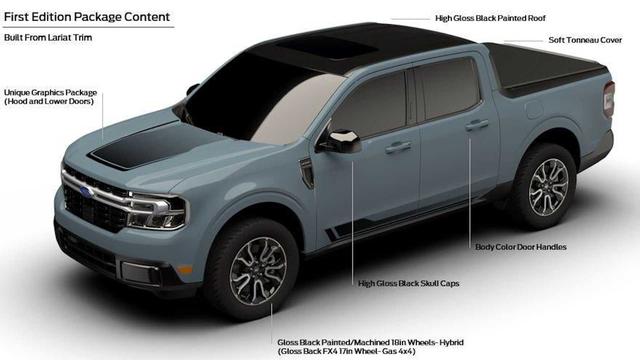 “We absolutely expect we’ll be seeing customers coming from small hatchback or utilities,” said Trevor Scott, marketing manager for Ford Maverick and Ranger. Which has been the goal for quite some time, but it’s been awhile since they’ve cut their small pickup so close in size to the CUV on which it’s based, though the Maverick does have a longer wheelbase and has a taller maximum height than does the Escape, and is both longer overall and has a longer wheelbase than the Bronco Sport.

Style-wise, it is unique from both the Bronco and Escape, what with its huge LED headlamp lenses and unique grille that gets bisected by twin chrome strips. ‘Round back, putting aside for a moment that it has a pickup bed, its taillight lenses are actually quite Bronco-esque, while the way “Maverick” is stamped across the entirety of the tailgate reminds of the F-150. Unlike the Santa Cruz, though, the Maverick looks much more the small pickup as opposed to the Hyundai, which somehow looks more like a CUV that’s had its rear cabin area lopped off. Different strokes, we suppose.

Speaking of the pickup bed: Ford calls it “Flexbed”, and they say it’s the most innovative pickup bed they’ve ever created as it comes with all the fixings: 12V power outlet, multi-position tailgate, two 2×6 storage pockets, threaded bed holes for do-it-yourself installation of bed add-ons, as well as optional 110V power and two additional storage cubbies. There’s even a tailgate cleat that doubles as a bottle opener, if that’s your kind of jam.

“Surprising levels of capability,” said Chris Mazur, chief engineer for Maverick “was explicit for this program.” So, it should come as no surprise that the bed is as usable as it is.

Inside, it’s a thoroughly modern affair centered around an eight-inch touchscreen that gets both Android Auto and Apple CarPlay compatibility. You can pair up to 10 devices to the on-board WiFi hotspot, while the FordPass app allows you to check fuel levels, unlock the doors and more.

Right alongside and above the display, however, are storage cubbies to maintain the image that this is also a truck meant to easily haul people and their wares. There’s also underseat rear storage big enough for basketballs, roller blades or laptop bags as well as what Ford calls a FIT slot mounted to the rear of the centre console that can accommodate an array of accessories, from an extra cupholder, to more storage, chord organizer or double grocery hook. Above that, we find 120V outlet and two USB ports of both the USB-A and USB-C variety. Top trims get niceties like two-tone leather seating and other interior panels, to ensure that if you are using this as more of a daily driver, it’s got the creature comforts that suggest you can.

It’s a new day in the world of the Ford pickup – pickups in general, really – and we’re excited to see where all this goes.

This story first appeared on the wheel. ca