2017 Ford F-150 Raptor: Lighter and faster thanks to new engine and extreme testing

You know the Ford F-150 Raptor. It's a bit like what would happen if F-150 and Mustang had a baby, and the baby took a lot of steroids. Yes, that truck. Look, I am not a trucker. For me, the truck is what you use to tow your car to the track on race weekends, but in the case of the Raptor, I might make an exception. I will definitely make an exception for the 2017 Ford F-150 Raptor.

The Raptor is a big brute of a guy, and shortly after it arrived, it featured a big honkin’ 6.2 V8. But, fuel economy standards and all that made Ford yank that mill out, and replace it with – please sit down – a 3.5-liter turbocharged V6.

But fear not red-blooded Americans! The 2017 Ford F-150 Raptor is still frighteningly fast (mainly off-road), but with the new engine, you also spend less money on gas.

The 2017 Raptor sheds 500 lbs. with a military-grade aluminum-alloy body, same as the current F-Series trucks. It’s the first transmission from Ford not to use cast-iron components, but “advanced materials and alloys” instead. The mad scientists at Ford matched the lighter frame to a second-generation 3.5-liter high-output EcoBoost.

The engine cranks out 450 horsepower and 510 lb-ft. of torque with a 23 percent improvement in EPA-estimated combined fuel economy. The weight reduction measures also improved towing numbers, as the truck uses more of its available horsepower and torque to carry loads, versus only hauling its big honkin’ self around. Of course, Ford says all this lightness helps the Raptor’s fuel economy, but you have to keep your foot out of it I assure you.

Ford upgraded everything they could get their hands on, including an electro-mechanical gizmo called the “Terrain Management System.” It’s a cutting-edge transfer case, according to Ford, that combines all-wheel drive and four-wheel drive. Spirited off-roading, foul weather driving, it has you covered thanks to four preset traction control modes: sport, weather, four-high desert, and four-low locked off-road driving.

This is all controlled either automatically through the Terrain Management System, or manually via the 4×4 switch. The transfer case has an electronically-controlled clutch that reacts on-demand. An electronic shift-on-the-fly system with mechanical locks helps attack “all types of terrain for serious off-road performance,” according to Ford. 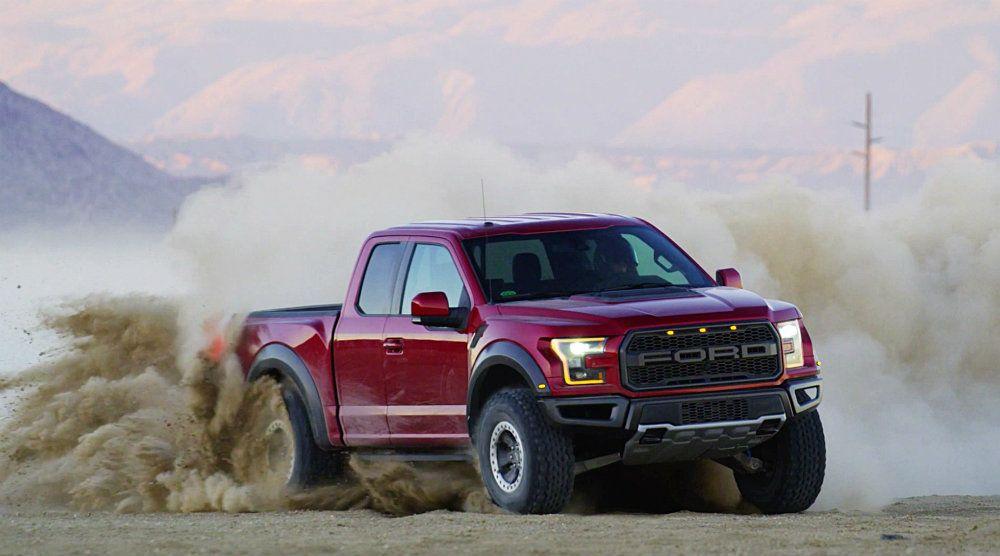 “Raptor’s transfer case provides the best of both worlds, with the natural benefits from all-wheel drive, such as increased traction in rain and snow, as well as extreme off-road capability that comes with a mechanically locked system,” said Tony Greco, Ford F-150 Raptor Program Manager. Photo: Ford Motor Company.

Characteristically, truck four-wheel drive systems come in two varieties. There are on-demand systems that use a clutch to send the torque to the front driveline, which is sort of how all-wheel drive setups work, or they use electronic shift-on-the-fly systems with mechanical locks to couple the front and rear driveshafts.

Ford pursued enhancements to the daily driving experience of the Raptor while keeping the truck’s off-road performance in play. With the clutch-based attributes of the transfer case, you can travel on-road with the 4×4 auto setting, which delivers the benefits of four-wheel drive without damaging components or binding the driveline.

The dual-mode transfer case manages the distribution of power between the front and rear wheels, obviously, but the key is the clutch-based, on-demand all-wheel drive capability for everyday driving. This includes an all-weather mode and a mechanically locked, durable four-wheel drive system for poise and control in severe off-road driving environments.

With the non-sequential 10-speed transmission and that high-output EcoBoost engine, the new Raptor can deliver its 450 horsepower and 510 lb-ft. of torque way more efficiently, either on the road or way out in the boonies. Add in the Fox Racing shocks, BFGoodrich off-road tires, and a dual-performance exhaust, and you are good to go.

Ford completed over 1,000 miles of testing with the Raptor by blasting through the Southwestern United States. Ford built a 66-mile course in the desert that mirrors the infamous Baja in Mexico: deep sand, steep climbs, tight trenches, etc. On that course, the Raptor averaged 55 mph, racing up to 100 mph at times, then slowing to 10 mph, depending on the terrain. Submitted to a lifetime plus of driving in a matter of days, the 2017 Ford F-150 Raptor is 25 percent faster than the current truck based on these tests.

Then Ford looked at the Terrain Management System specifically and put it through 2,500 miles of competition testing in the 2016 Best in the Desert series. The darn beast completed the 850-mile SCORE Baja 1000 with nary a hitch. This is the cool part: Greg Foutz Motorsports team members drove the truck back to their headquarters in Arizona another 400 miles. How’s that for reliability under stressful conditions?

The concise version here is that although the 2017 Ford F-150 Raptor, delicious as it is, changed engines, it gave up absolutely nothing in performance – shoot, it actually got better. The video below from Ford Performance explains more.

Bricks & Bones: The Endearing Legacy and Nitty-Gritty Phenomenon of The Indy 500, available in paperback or Kindle format.