Hyundai STARIA will amp interior
ZTSG 28/11/2021 Truck 271
Hyundai STARIA will be fully unveiled later this year, but Hyundai has already shared some photos with us in advance. STARIA is described as a multi-purpose vehicle (or "MPV") and represents Hyundai's...

Hyundai STARIA will be fully unveiled later this year, but Hyundai has already shared some photos with us in advance. STARIA is described as a multi-purpose vehicle (or "MPV") and represents Hyundai's more comprehensive vision for the future of transportation. STARIA is part of the modern human progress plan, which means that they want to transform from a traditional manufacturer to a "smart mobile solution provider."

Hyundai’s goal is to provide something beyond an ordinary, everyday vehicle with the STARIA. As such, the STARIA will accommodate a wide swath of buyers, from individuals and families to business owners and fleet managers. Hyundai says the STARIA is engineered to be more “productive and worthwhile” for potential buyers by offering things like a lounge-inspired interior that prioritizes passenger space.

“STARIA is Hyundai’s first mass-produced vehicle model that is designed with the ‘inside-out’ design approach, explained SangYup Lee, Senior Vice President and Head of Global Hyundai Design. “STARIA will provide a completely new experience and value proposition to customers through its unprecedented design and innovative features.”

Indeed the spacious interior of the Hyundai STARIA is space-age! Or, if not space-age, definitely nautical by design. Hyundai did take inspiration from cruise ship lounges, evidenced by the lower interior beltlines and expansive panoramic windows. Depending on the configuration, the STARIA will seat either seven or nine with plenty of storage and USB ports for both drivers and passengers.

High-end variants of the seven-seat STARIA will include a “one-touch relaxation mode” for second-row passengers. This mode, according to Hyundai, automatically reclines the seat but uniquely disperses the passenger’s body weight for greater comfort in doing so. Meanwhile, the nine-seater has second-row seats that swivel 180 degrees so occupants can chat with other passengers.

Drivers have access to a 10.25-inch front display, touch-based center fascia, and a button-type electroni 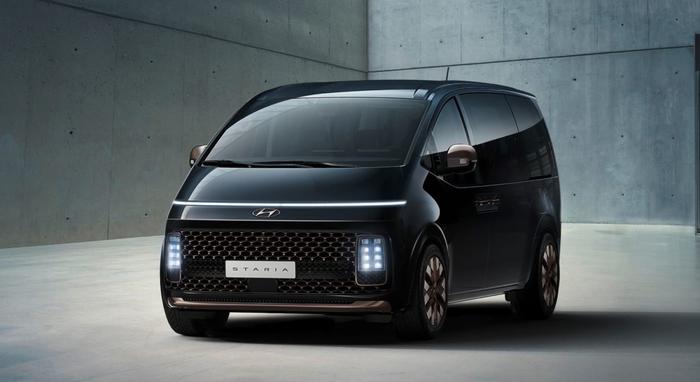 c shift lever. An additional digital cluster resides on top of the dashboard, although Hyundai says it will not obstruct the driver’s view.

Just like the inside, the Hyundai STARIA is equally futuristic and fluid in terms of its design. While the interior was modeled after cruise ships, the exterior was inspired by what you might see from such a ship’s deck: the sunrise. According to Hyundai, the halo that illuminates Earth’s horizon during sunrise when viewed from space is the basis for the STARIA’s exterior design.

From there, Hyundai expands on a traditional Korean architectural style known as hanok; a sense of spaciousness that makes passengers feel as if the outside connects to the inside. This is where the lowered beltlines and the panoramic windows from the cruise ship idea come into play. And it’s this “inside-out” approach that Hyundai hopes will resonate with future buyers.

The name is a combination of two words, Star and Ria. The Oxford Advanced American Dictionary defines Ria as a long narrow area of water formed when a river valley floods.

The Hyundai STARIA will make its digital world premiere later this year. Pricing information is still forthcoming. An 11-seat STARIA will also debut, but that variant will only be available in Korea.