McLaren GT3 720S race will
ZTSG 23/11/2021 Truck 259
This is not surprising, but it's still cool. McLaren is turning its 720S sports car into a mature, factory-supported race car. Like all serious sports car manufacturers, McLaren has a long history of...

This is not surprising, but it's still cool. McLaren is turning its 720S sports car into a mature, factory-supported race car. Like all serious sports car manufacturers, McLaren has a long history of turning factory cars into racing cars. This is nothing new. In fact, this is the meaning of "sports" in sports cars: you can, be encouraged, and should participate in the race. This is what the McLaren 720S GT3 is all about.

Back in the 1950s (to just pick an era at random) if you drove something like a Jaguar XK120 and didn’t race it on the weekends, you were somewhat suspect. You raced your Jaguar because Jaguar raced theirs. It was what one did, old sport. Of course, back in the 1950s, a McLaren road car wasn’t even a gleam in young Bruce McLaren’s eye. At that time, he was messing about with modified Austins and such in his rural New Zealand. And winning with the darn things. Fast forward more than half a century, and the company that bears his name is still in the thick of things.

The thumbnail sketch here is how the new 720S GT3 will be a follow-up effort to McLaren’s successful 570S GT4 and 650S GT3 racing program. The 650S stacked up the trophies like nobody’s business, winning 19 races, landing on 19 podiums, and grabbing the pole position for the Spa 24-hour race. The 720S GT3 will begin testing next year and launch with customer teams in 2019.

The specs for the upcoming McLaren 720S GT3 are very impressive indeed. Power is supplied by a race-prepped 4.0-liter twin-turbo V8, M840T engine. No power output is specified (of course), but since the street version puts out in excess of 700 ponies, you can expect the race car to either put out more than that or safely match that number and not blow up over the course of a race (not blowing up is a very important thing in racing). Ratios are selected from a six-speed sequential motorsports transmission. 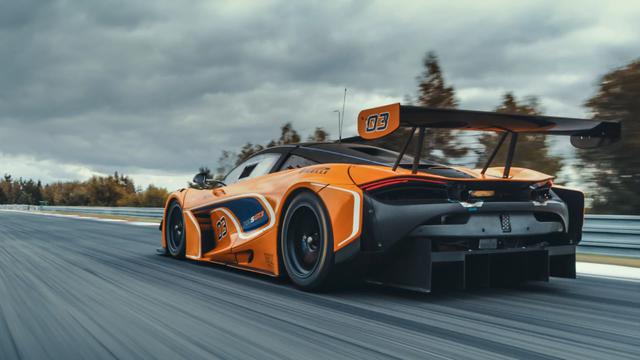 This is all a nice way of saying the internals are all-new, the ratios available comprise a much broader spectrum, and out are such niceties as synchros and in are things like dog rings, straight cut gears, and change over times literally faster than you can blink your eye. Naturally, the drive

train is situated longitudinally (mainly for packaging reasons) and sits in the middle of the chassis, powering the rear wheels.

The chassis is all cloth and glue. The McLaren carbon fiber MonoCage II setup is an ongoing refinement of what the Woking-based outfit has been doing for quite a while now. It’s very light, very rigid, and could probably take a broadside impact without deforming much, if at all. Carbon fiber is also used in the body panels, front splitter, floor assembly, dive planes, and GT3-specification rear wing. All of these: the chassis, bodywork, and aero bits are specific to the McLaren 720S GT3 racer, or bespoke, as the Brits love to say. The 720S GT3 will be shod with Pirelli racing tires that will be controlled at all four corners via adjustable dampers (i.e. shocks) with coil-over springs.

On the inside, the pilot of the McLaren 720S GT3 will be cosseted in an FIA-approved seat with winged headrests. Trust me, you don’t want to look too hard into stuff like side-impact Gs, basal skull fractures, routine concussions that would get you permanently benched in the NFL, or the thousands of other reasons modern racing seats have headrests that hold your head firmly in place. Naturally, the driver in question is held in place via a six-point race harness, surrounded by an FIA-approved roll cage tougher than jail bars with a fire extinguisher system just in case things get too hot.

Tony Borroz has spent his entire life racing antique and sports cars. He is the author of Bricks & Bones: The Endearing Legacy and Nitty-Gritty Phenomenon of The Indy 500, available in paperback or Kindle format. Follow his work on Twitter: @Tony