Home > Truck > The movie that made the car legend (infographic)

The movie that made the car legend (infographic)

Mustang car movie Fastback Ford
ZTSG 04/02/2022 Truck 202
For decades, movies have played an important role in automobile culture; whether intentionally or unintentionally, a movie can make a car a legend.There are some great examples of this phenomenon in t...

For decades, movies have played an important role in automobile culture; whether intentionally or unintentionally, a movie can make a car a legend.

There are some great examples of this phenomenon in this new infographic put out by CJ Pony Parts which you can see below.

This is probably one of the best examples of a movie making a car a legend. Unsurprisingly, the ’68 Mustang Fastback from Bullitt has been listed by us a few times before, including being the best car chase scene in history, and as being one of the most famous first generation Mustangs.

I’m not sure if this one helped sales of the Plymouth Fury or hurt them, but nobody can deny that this killer car that formed such a strong attachment with her owner is a legend due to the movie. 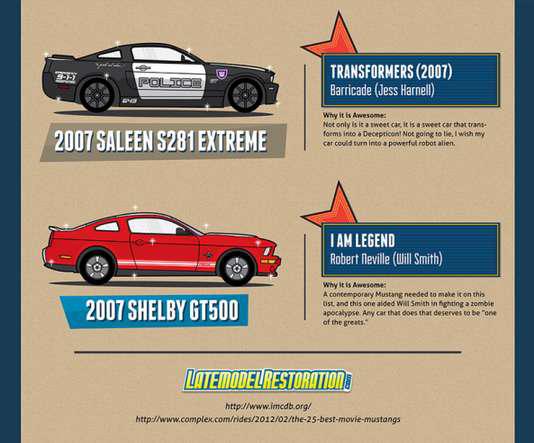 Same here – although I doubt the movie had a huge effect on sales one way or the other, but one thing is for sure –

it’s not easy to clean blood off the seats of this thing. Just ask Vincent and Jules.

I’ve always been a fan of this era Mustang, but I have to admit – when I first saw Eleanor on the big screen in this flick I fell in love. Too bad good examples of this nearly 50 year old car still go for the same price as a new Subaru STi.

Out of all the cars these guys could have used from Transformers and they pick the Mustang cop car. I get it guys, you sell Mustang parts, but give me a break. You need some editorial non-bias here.

Obviously Bumblebee – the Chevy Camaro and star of the film – should be the one listed here.

Although Lamborghini actually has nothing to do with Batman’s Tumbler (aka Batmobile,) it’s often attributed to the likeness of a Lambo due to its looks.

Despite this, it’s a badass “car” or whatever it is. I’d give my left nut to drive one of these around.

Be sure to comment below and tell us any other legendary movie cars that should be in this list.