In the end, Porsche engineers can only get so much performance from the 911 platform. One day, someone in Stuttgart will say: "We can only do this." One day, but not today. Because the 2022 Porsche 911 GT3 is here, and I got his help!

“Whether it’s a customer enjoying their favorite twisty back road or taking to the track, the new 911 GT3 promises to be among the most exciting and rewarding cars we make,” said Kjell Gruner, President and CEO of Porsche Cars North America, and I, for one, will not argue with him in the slightest. Look, I’m not that much of a Porsche guy, but facts are facts, and the immutable fact here is that the latest GT3 is a staggering performer.

Basically, it’s a naturally aspirated 4.0-liter, six-cylinder boxer engine that redlines at 9,000 rpm and cranks out 502 horsepower and 346 lb-ft. of torque. That is a lot for such small displacement, not to mention that’s a redline you used to only see on motorcycles. The new mill is said to offer an “extremely sharp” throttle response due to its six independent throttle bodies. Porsche says the engine is virtually identical to the unit found in the new 911 GT3 Cup race car, which makes complete sense and is also completely cool.

South of the engine, you will find a seven-speed Porsche Doppelkupplung (PDK) transmission that was engineered and tuned specifically for the 911 GT3. The PDK is the standard transmission, but all of you neo-Luddites out there can settle down because a six-speed manual is also available if you like to roll your own. Other details found on the GT3 plant are new pistons and a dry-sump system that uses seven suction stages to return oil to the external tank.

In case your wondering, this adds up to a zero to 60 mph time of 3.2 seconds, and a top track speed of 197 mph. You have to admit, that is highly impressive for something that started as a hot-rodded Volkswagen over 60 years ago.

Getting to that level of performance, the engine is aided and abetted by judicious use of lightweight materials that allow the new 911 to weigh almost virtually the same as its predecessor, despite there being lots of new tech along for the ride. The hood, rear wing, and rear spoiler (it’s a bi-plane setup) are all made of carbon fiber. Lightweight, noise insulated glass on all of the windows – an old Porsche trick – also helps hit the weight targets. 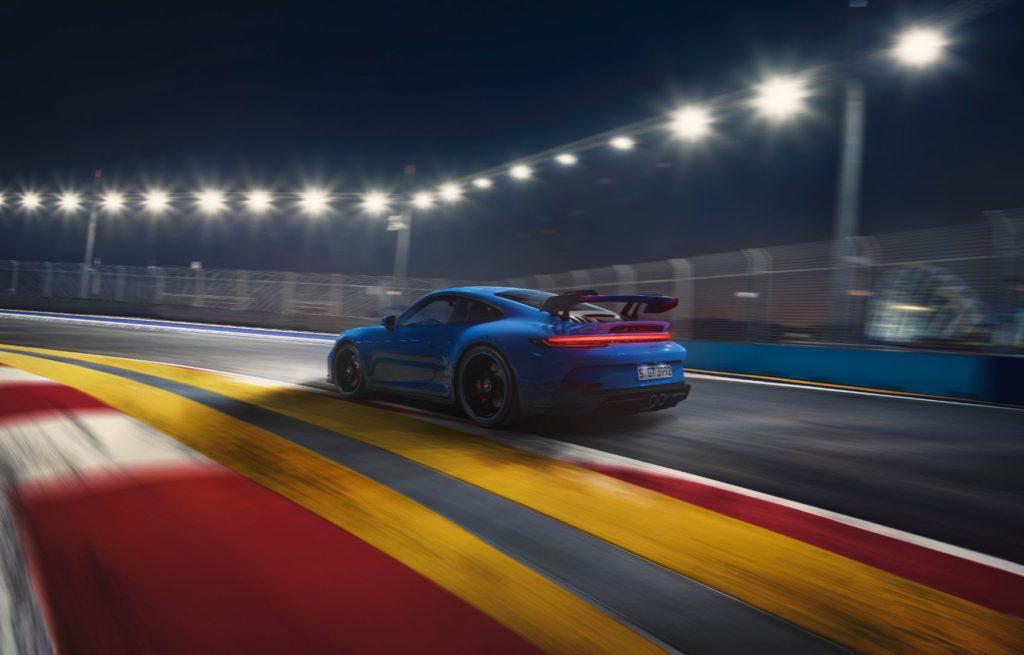 The chassis setup, which, incidentally, does not share any parts with the current 911 Carrera, features a double-wishbone front axle derived from the 911 RSR and 911 GT3 Cup cars, although it was adapted for road use. The new front axle, according to Porsche, offers more direct and precise steering. Cornering stability also improves according to Porsche, allowing for higher cornering speeds and better mid-corner control over uneven pavement

If that’s not enough (and, really, when do you have “enough” grip?), then you can tick the option box for the street-legal track tires that were used to set benchmark laps at the Nürburgring-Nordschleife. Oh, and if you’d like, you may also specify Shark Blue or Guards Red pinstriping on the wheels.

Aerodynamics were also squeezed for all they were worth for the 2022 Porsche 911 GT3. The new front fascia includes integrated cooling intakes and an adjustable front lip spoiler along with an adjustable front diffuser that can be dialed in for track use. Specially developed side skirts optimize airflow around the wheels, while at the back, you’ll find swan-neck supports for the rear wing and a large diffuser.

The new GT3 bests the old dog 911 GT3 and its aero numbers by 50 percent, even with the rear wing in the “normal” position. If you crank things all the way up (Porsche calls it the “performance” position), you get an overall downforce increase by up to 150 percent.

The interior is just as track-focused as the outside. The GT3 gets a 360 mm diameter Multifunction Sport steering wheel with Race-Tex upholstery as standard equipment. For the first time, the steering wheel includes a drive mode switch for choosing between driver-configurable settings by simply turning the dial.

The GT-specific “Track Screen” reduces the amount of information down to the “bare essentials.” Meanwhile, the Chrono Package, which is available as a no-cost option, features an analog stopwatch on the dashboard and a digital stopwatch in the instrument cluster.