Brembo and Nissan hit the drawing board for one of the most robust braking systems yet.

From bright yellow paint to cooling holes, a look at the GT-R NISMO’s Brembo braking system.

The 2020 Nissan GT-R NISMO’s engine is homemade; hand-assembled in a special clean room by skilled technicians known as Takumi craftsmen. With a turbocharger design inspired by the GT-R GT3 race car, a six-speed dual-clutch transmission, and numerous weight reduction measures throughout, the GT-R NISMO is as much monster as it is machine. This explains the Godzilla moniker. When you’re running around with 600 horsepower and 481 lb-ft. of torque, you will crush any roadway.

But keeping it all under control? That’s another story.

As we wade through the buildings toward the center of town, here’s a look at the 2020 Nissan GT-R NISMO’s Brembo Braking System.

The Benefit of Experience

Out of The Bag

A larger, more robust braking system was necessary to rein in the fire-breathing dragon that is the GT-R NISMO. Development teams from Brembo and Nissan hit the drawing board, envisioning a carbon ceramic system accented by bespoke calipers. Engineers from both teams elaborated on ways to make the components more durable, more responsive, and ultimately lighter.

“The bar is always higher on the next generation of a vehicle,” explained Dan Sandberg, Brembo North America President and CEO. “The GT-R NISMO is lighter than its predecessor, the 600 horsepower being the biggest difference compared to the last generation.”

Carbon fiber decorates a large area of the new GT-R NISMO’s body. The front and rear bumpers, front fenders, hood, roof, side sill covers, trunk, and rear spoiler are all carbon fiber. Usage of the material here cuts 23 lbs. from the car, with another 44 lbs. shaved off through other upgrades and new components. Cutting weight means the engine’s power (resulting from a twin-turbo in this instance) is all that much more effective. And thus, the braking system must be too.

“The process, like with many of our customers, especially on a second-generation project, is to improve driver feel and stopping power while contributing to the weight loss of the overall vehicle,” Sandberg said.

Development teams from Brembo and Nissan worked together on the carbon ceramic braking system for the 2020 Nissan GT-R NISMO. A larger, more robust system was necessary to handle the car’s performance increase. Photo: Nissan North America.

The Benefit of Experience

Brembo stops rocket ships like the 2020 Nissan GT-R NISMO on the daily. The company’s namesake is associated with the world’s most powerful racing machines already, like Formula 1 and Indy cars. Brembo holds more than 400 Motorsport titles and championships; and each has given the brake manufacturer a unique perspective when it comes to road-going cars. For example, Brembo was able to leverage their experience as the brake supplier of the latest generation of GT-R NISMO race cars.

“Even though those brake components, per GT series rules, were cast iron, there were lessons to be learned that were brought forward to the street cars,” Sandberg said. “Like equalizing the pressure across the pads; wear rates of the pads, and overall brake feel through proportioning of front-to-back brake pressure.”

He elaborated further, referencing Brembo’s extensive history in Formula 1 and at Le Mans.

“It aided in the design of this system for the GT-R NISMO,” Sandberg continued. “Take the Formula 1 extremes of a sprint race, combine the data for longevity by winning Le Mans on one set of discs and pads, and you have some good data to engineer a brake system for a road car.”

“The drilled and vented rotor is the best of the best when it comes to maximum stopping power and driver control,” Sandberg said.

Sandberg notes that in the last decade, braking distances in Formula 1 have dropped by 22 percent, with the amount of time drivers spend on the brakes down 15 percent. The pattern is significant in the sense that even though drivers are spending more time on the accelerator, braking is all that much more valuable. To better match the driver’s demands, Brembo’s Formula 1 systems have jumped from 200 cooling holes to 1,400, a 600 percent increase.

“The data gleaned from our Motorsport activities shows us how our brakes hold up, perform, and endure under extreme conditions,” Sandberg said. “For example, we know that Formula 1 brakes are ‘happiest’ when operating from 450 °C to 1,000 °C. To think we get 1,400, 2.5 millimeter holes in a Formula 1 rotor that measures 278 millimeters in diameter for cooling is pretty remarkable.”

With a hot car like the 2020 Nissan GT-R NISMO, keeping the temperature down is a challenge. It’s one thing for the calipers and the discs to look cool (and they do), it’s another for them to actually be cool. Engineers from Brembo and Nissan spent a considerable amount of time making sure the new system could breath accordingly. Doing so was paramount and, like in Formula 1, the cooling holes came into play.

“On a race car there are great efforts taken to get maximum air to cool the brakes, while not disrupting the aerodynamics of the vehicle – the overall flow of air over the car,” Sandberg explained. “On a road car, it is more difficult to get maximum cooling to the brakes. Therefore, the available air is used through cooling holes and vents in the disc as well as by the design of the caliper.” 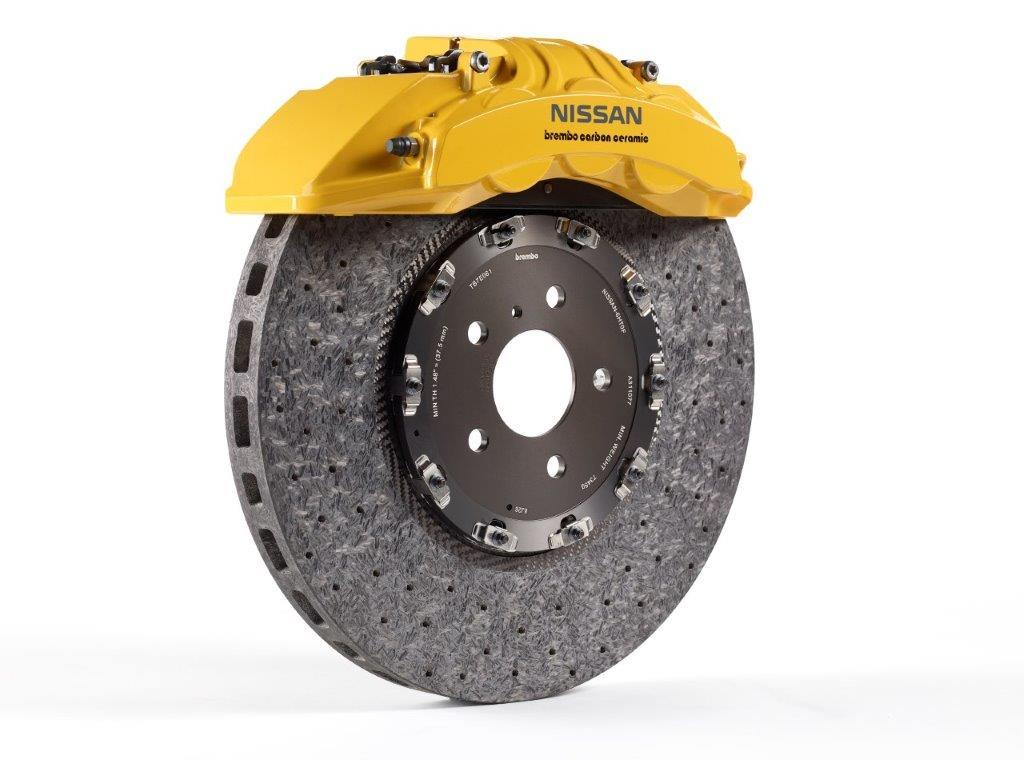 The eye candy comes by way of the aluminum monoblock six-piston calipers in front, joined by massive carbon ceramic discs, the largest Brembo discs on a sports car yet. The caliper employs muscular “tubes” at the top to maximize stiffness and rigidity. The caliper is a bit slimmer to accommodate the hulking discs, which measure 16.14 x 1.5-inches (410 mm x 38 mm). Despite the size of the carbon ceramic discs, they are still 18 lbs. (-15%) lighter when compared to a cast iron setup.

“The six pistons within the caliper have staggered diameters: 28-32-38 millimeters to assure consistent brake pressure across the brake pad surface for excellent stopping power,” Sandberg said. “In addition, the aluminum bell that connects the carbon ceramic disc to the hub is very lightweight but engineered for additional strength.”

At the rear, the four-piston, aluminum monoblock calipers measure 30 millimeters. They are married to carbon ceramic discs measuring 15.35 x 1.26 inches (390 mm x 32 mm). In total, the system cuts 35 lbs. of unsprung weight from the GT-R NISMO. A lighter system means the GT-R NISMO’s handling and agility increases, especially through corners. And they don’t look half bad either.

“When you combine the size and dark grey color of the rotor with the brilliant yellow caliper, you have a great looking system that projects through the 20-inch, nine-spoke wheels,” Sandberg said.

Related: Godzilla gets bigger teeth for 2020 with the new GT-R NISMO.

Hiroshi Tamura, Chief Product Specialist for the GT-R, says despite the car being a quintessential picture of performance, it can be driven normally. Nissan packaged race-proven technology in a way that accommodates drivers of any skill level, from novice to professional. On the inside, the GT-R’s front seats hold the shoulder blades and lower body more firmly versus the prior generation. Such a design is ideal, be it on the racetrack or down the boulevard.

“The new NISMO has been brought to a new level, with enhanced engine, handling, braking, and aerodynamics,” Tamura said, explaining further how the GT-R’s capabilities derive from “making small tweaks to squeeze out as much as possible from the engine and chassis.”

For example, Nissan’s engineers spent a fair amount of time programming the “shift schedules” of the GT-R’s transmission. Opting for this surgical approach means the GT-R adjusts its shift points based on what a driver needs at that exact moment. Enhancements like this allow the GT-R NISMO to handle everyday roads and racetracks alike.

Similar to the transmission, the braking system must adapt to different styles of driving. Sandberg notes that drivers will often enjoy a day at the track with their beloved performance car. “Just bring your helmet,” he said, explaining how customers of high-performance vehicles are always curious as to what they can do in a controlled environment. The challenge for Brembo’s engineers is to accommodate intense braking on a hairpin turn one moment – say from 150 to 50 mph – to rudimentary stop-and-go city driving at modest speeds.

“We have to account for that with the brake system,” Sandberg explained. “To increase the challenge, they drive home with that car; therefore the brake system has to be quiet and compliant for that commute. The expectations for the brake system is quite diverse, requiring not only performance but impressive NVH characteristics.”

“The 2020 GT-R NISMO has evolved into a balanced, yet extreme, performance car,” Tamura said. “Pursuing driving pleasure is the most important concept behind GT-R, and the new NISMO’s performance suggest it is a car that belongs on the race track – but is also at home on the open road.”

Out of The Bag

The 2020 Nissan GT-R NISMO still very much embodies the Japanese expression “to wear a cat on one’s head.” The idiom is a reference to pretending to be nice, or as a cat might hide their teeth and claws until the moment it pounces. Rest assured, the GT-R NISMO can and does pounce, to the tune of two turbos and a special “R Mode” that is the stuff of dreams (or nightmares, depending on your vantage point).

Perhaps this is the inherent joy in cars like the Nissan GT-R NISMO? Cruise down main street one day; down a backstretch the next. To and from the office during the week, slugging through bumper-to-bumper traffic, all to set a personal-best at the track over the weekend? And why not.

“We have built the 2020 GT-R NISMO for our customers to be the ultimate track and street vehicle,” Tamura said. “It is about total balance management, not just chasing power figures.”

“When you market the car as ‘the ultimate track and street vehicle,’ they want it all,” Sandberg added. “And Brembo’s carbon ceramic system on the Nissan GT-R NISMO offers the best of both worlds.”

Carl Anthony studies mechanical engineering at Wayne State University, serves on the Board of Directors for the Ally Jolie Baldwin Foundation, and is a loyal Detroit Lions fan. Before going back to school, he simultaneously held product development and experiential marketing roles in the automotive industry.

Largest of their kind from Brembo on any sports car today.

Cross-drilled cooling holes work together with the side ventilation channels.

Carbon and silica carbide structure of the rotors is nearly as hard as diamonds.

The front discs use a bell made from high-strength aluminum to further cut weight.