The Lexus NX is a vehicle of firsts for the luxury brand from Toyota. It was the first compact crossover from Lexus, the first with a turbocharged engine, and the first example of a more extreme design language. This new, aggressive exterior styling is now showing up on other Lexus models, like the new RX 350 F Sport we tested earlier this month.

While some won’t like the big, “hourglass” grille up front, it’s starting to grow on others as it sets itself apart from the crowd. Over the

New for 2015, the Lexus NX carries over unchanged for 2016 except for some new colors and expanded smartphone capability. 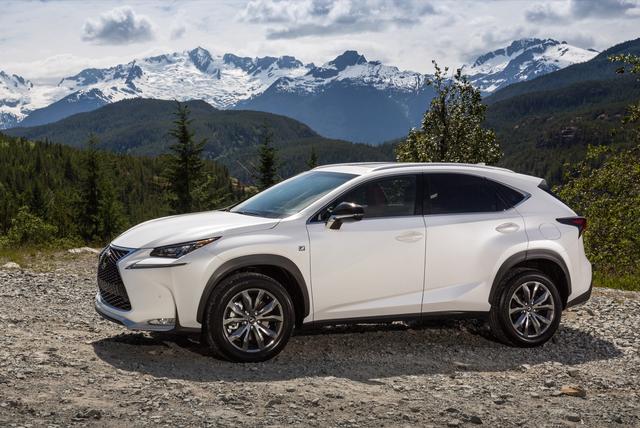 The NX interior is the strong point with a level of craftsmanship not typically found in a small, luxury crossover. The 2-tone leather interior with Dark Umber trim and light stitching is stylish and attractive. We especially liked the lighter colored seats that were cooler on warm days. If we did get too warm, we turned on the ventilated seats – they worked like a charm too.

The leather seats in front and back are noticeably soft and extremely comfortable. The seats aren’t elevated like in other crossovers, which increases headroom and gives the driver and passengers the unique sensation of driving a typical sedan.

There’s lots of legroom and headroom in the back and the NX feels like a bigger vehicle than it is. Lexus gave rear passengers plenty of room, but had to take it away from the cargo area. There’s 16.8 cubic feet with the seats up and 53.7 cubic feet of total cargo carrying volume, which falls short of the competition. There is storage under the cargo floor for valuables you want to keep out of sight, however.

Visibility suffers because of the raked roof, but large outside mirrors and a backup camera make up for it.

is powered by a hybrid power plant using a 2.5-liter four-cylinder engine and a pair of electric motors. Total combined output is 194 horsepower. The hybrid system is mated to a electronically controlled Continuously Variable automatic transmission (ECVT).

EPA estimates are 33/30 city/highway mpg and 32 combined with all-wheel drive.

Other than the annoying drone from the ECVT automatic transmission, the cabin in the NX 300h is quiet and comfortable. When it’s in EV mode, it’s eerily quiet if you don’t have the radio turned up. The NX’s hybrid system is designed for efficiency, rather than performance. Acceleration is good for most driving situations – less than the NX 200t, but the 300h is the mileage champ.

It does feature a kickdown switch for an extra burst of power when you need it.

The 300h features an EV mode that allows it run on full-electric at low speeds (under 30 mph) for up to a mile. We stayed in EV most of the time while navigating through parking lots and in stop-and-go traffic this weekend.

The hybrid-powered NX 300h behaves very much like the gas-powered NX 200t but doesn’t have the power off the line. Overall, the 300h has sporty driving dynamics and handled the tight mountain corners well in our area. The larger, 18-inch wheels look cool, but the ride suffers a little and they don’t soak up the bumps as well as the standard, 17-inch aluminum wheels.

The 2016 Lexus NX 300h looks a little different than other crossovers because it is. It features bold exterior styling that won’t appeal to everyone. Once you step inside, however, the cabin will win you over with its extra attention to detail, luxury, and quality. The NX is a good alternative to another cookie-cutter, five-passenger crossovers. It features excellent fuel economy, impeccable cabin quality, eye-catching styling, and a sporty driving experience.

Some F Sport models shown in the picture above