2021 Ford Bronco overview: G.O.A.T will challenge the Jeep after a 25-year hiatus

The Ford Mustang is finally here in 2021. I have been waiting for a long time. Ford first produced it in 1966 to directly compete with the Jeep CJ-5, and in 1996 stopped producing the fifth-generation Mustang. Twenty-five years later, Ford renamed the Mustang in three variants: two-door, four-door, and a more compact sports car.

What Engine Does The 2021 Ford Bronco Have?

The sixth-generation Bronco is a midsize SUV. It’s riding on the underpinnings of the Ranger. Meanwhile, the Bronco Sport is a compact crossover based on the Ford Escape. The new Bronco is a direct competitor to the Jeep Wrangler. As such, the Bronco comes with multiple drop-top options for the roof, removable doors, and a plethora of rugged off-road hardware.

The new Bronco is available as a two-door or – for the first time in Bronco’s history – as a four-door SUV. Every Bronco variant has four-wheel drive and a standard two-speed electronic shift-on-the-fly transfer case. Ford is also offering a more advanced 4×4 drivetrain with an electromechanical transfer case.

True to form, the 2021 Bronco inherited the boxy, rugged looks of its predecessor. It has squared-off proportions, a butch stance, and short overhangs. “The side profile features a flat, no-nonsense surface with clear-cut edges and robustly flared fenders,” added Paul Wraith, Bronco Chief Designer.”

Don’t let the boxy countenance fool you, though. The new Bronco is designed to conquer the wilderness. It has a maximum ground clearance of 11.6 inches, and it can forge water crossings up to 35.5 inches deep. Furthermore, those short front and rear overhangs allow the Bronco to have a maximum break-over and departure angle of 29 degrees and 37.2 degrees, respectively.

Both the two-door and four-door Bronco are sitting atop a fully-boxed and high-strength steel chassis, independent front suspension, and a five-link solid rear axle with coil springs. Bilstein long-travel dampers are available, while a semi-active hydraulic stabilizer bar disconnect system is optional across the board. The latter improves the Bronco’s off-road capabilities by offering maximum wheel articulation when climbing over rocks or boulders.

“We created the Bronco family to elevate every aspect of off-road adventure and equipped them with class-leading chassis hardware and exclusive technologies to raise the bar in the rugged 4×4 segment and take people into the wild,” said Jim Farley, Ford Chief Operating Officer.

The new Bronco has exposed front and rear tow hooks and up to 35-inch off-road tires straight from the factory. Meanwhile, beadlock-capable wheels are available on both the two and four-door Bronco for better off-road smarts. It also has strategically-placed skid plates underneath to protect vital hardware from damage. Moreover, higher-trim models receive metal shields for the engine, transmission, fuel tank, and transfer case.

What Engine Does The 2021 Ford Bronco Have?

The 2021 Ford Bronco is available with a pair of turbocharged gasoline engines. The base motor is a 2.3-liter EcoBoost four-cylinder rated at 270 horsepower and 310 lb-ft. of torque. The bigger engine is a 2.7-liter EcoBoost V6 producing 310 horsepower and 400 lb-ft. of torque. Standard on the smaller engine is a seven-speed manual gearbox with six regular gears and crawler gear equipped with a 94.75:1 ratio.

Ford’s 10-speed automatic transmission is optional on the 2.3-liter four-banger but is standard on the EcoBoost V6. The automatic has a maximum 67.8:1 crawl ratio.

As previously mentioned, the base Bronco has a two-speed electronic transfer case, while a two-speed electromechanical transfer case is optional. No matter which you choose, engine torque is transferred to the standard Dana 44 AdvanTEK solid rear axle and Dana AdvanTEK independent front differential. If you need more off-road chops, Ford is offering Spicer Performa-TraK electronic locking differentials to deliver better traction. 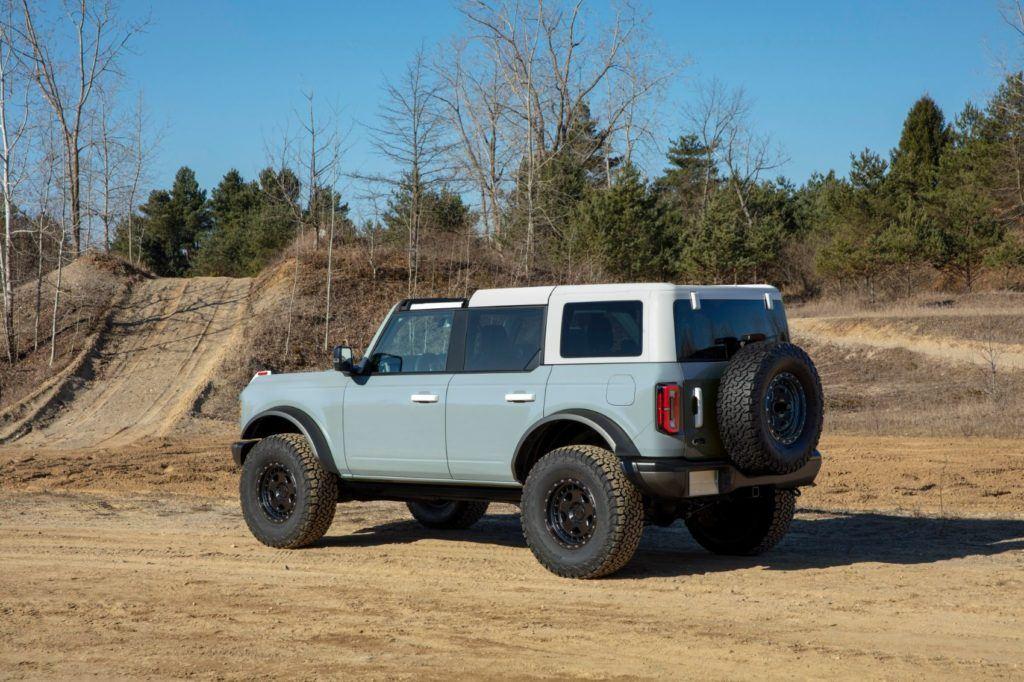 Related: Should you purchase an extended warranty for your Ford vehicle?

Ford didn’t just build a hardtop Bronco and call it a day. Ford engineers went the extra mile in creating multiple roof configurations to deliver a genuine open-top experience. The two-door Bronco has a standard three-section roof system with removable left and right front sections and a fixed rear section. The premium modular roof option features four sections and a removable panel over the rear seats and cargo area.

The four-door Bronco has a standard cloth soft top, although you can choose either a soft or hardtop, with the latter having four removable roof sections. According to Ford, all modular roofs feature removable rear quarter windows – and you can do so without removing the roof panels.

Additionally, all Broncos have removable frameless doors. With the four-door Bronco, all four doors can be stowed neatly inside the cabin. The side mirrors are mounted on the base of the A-pillars for visibility without the doors in place. Also noticeable are those “trail sights” mounted on top of the front fenders. Ford says it can also serve as tie-down points when carrying longer items like canoes and can support loads up to 150 lbs.

The 2021 Ford Bronco’s interior is reminiscent of the original Bronco with minimalistic dashboard designs and vertical air vents. However, the cabin is littered with modern touches including a color LCD instrument panel and an optional 12-inch touchscreen with SYNC4 and a 360-degree camera. The latter offers off-road spotter views to afford better visibility when tackling demanding terrain.

Depending on the model, the Bronco’s Terrain Management System and G.O.A.T modes are accessible via switches on the center console. The G.O.A.T. (or Go Over Any Terrain) mode offers up to six settings: Normal, Eco, Sport, Sand, Rock Crawl, Baja, and Mud.

Specific Bronco models are equipped with washable rubberized floors with integrated drain plugs and marine-grade vinyl seating. The former allows for easy cleaning while the latter resists mold and mildew. The dash-mounted and overhead switches are fitted with silicone rubber to protect against water.

Navigation is optional in the new Ford Bronco. But when equipped, it has topographical trail maps of more than 1,000 curated off-road destinations that work online or offline. The Bronco has standard Advance Trac with Roll Stability Control and Trailer Sway Control, while Ford’s Co-Pilot360 system is optional.

The 2021 Ford Bronco two-door starts at $31,490 while the four-door Bronco has a base price of $36,190. Both include the $1,495 destination charge. It’s interesting to point out that a base Jeep Wrangler is $1,700 less than a base Bronco. Nevertheless, the base Bronco has removable doors, a removable roof, five terrain driving modes, 30-inch tires and 16-inch wheels, and an eight-inch infotainment touchscreen with SYNC4.

Next up the ladder is the Bronco Black Diamond. It starts at $39,040 and includes a heavy-duty modular front bumper, a powder-coated rear bumper, bash plates, rock rails, 32-inch all-terrain tires with 17-inch wheels, vinyl seats, a rubberized floor, and auxiliary switches in the overhead console.

The Outer Banks trim starts at $41,945 and has all the goodies of the Big Bend. It also adds 18-inch black aluminum wheels, 32-inch all-terrain tires, LED headlights and taillights, fender flares, mirror caps, and powder-coated side steps.

The Bronco Wildtrak starts at $51,865. It begins with all the niceties from the Outer Banks and throws in the Sasquatch package as standard. It also has seven G.O.A.T. driving modes, carpeted flooring, and heated front bucket seats.

Finally, the Bronco First Edition starts at $62,295. Ford is only making 3,500 examples of the First Edition, which includes all the perks of the Sasquatch package. It also has First Edition body graphics and leather-trimmed seats, among many other features.

Customization is at the heart of every 2021 Ford Bronco. Dealers are offering more than 200 add-ons along with a bevy of accessories and bespoke options. However, production won’t start until early 2021, with the first deliveries arriving no later than the spring of 2021. Assembly of both the two-door and four-door Broncos will be at Ford’s manufacturing plant in Wayne, Michigan.