No Fuel? No Problem!

No Fuel? No Problem!

The raw numbers for this latest Cobra Jet, recorded during a recent round of private development testing, are simply head-shaking. A quarter-mile time of 8.27 seconds. The terminal velocity is 168 miles per hour. Peak power output for the Ford Mustang Cobra Jet 1400 prototype is 1,502 horsepower at the wheels.

Those would be awe-inspiring numbers for any drag car, let alone something that doesn’t burn a drop of fuel. 8.27 seconds, no matter how you get it, is a very fast drag time. But doing it on electrons?

“Since revealing the car, we’ve continued to fine-tune it and now know we’re just scratching the surface of what we may be able to achieve with this much electric horsepower in a drag racing setting,” said Mark Rushbrook, Global Director, Ford Performance Motorsports. “The opportunities to learn with the Mustang Cobra Jet 1400, as well as the Mustang Mach-E 1400 we recently introduced, gives us great insight into what may be possible in high-performance all-electric vehicles for Ford going forward.” 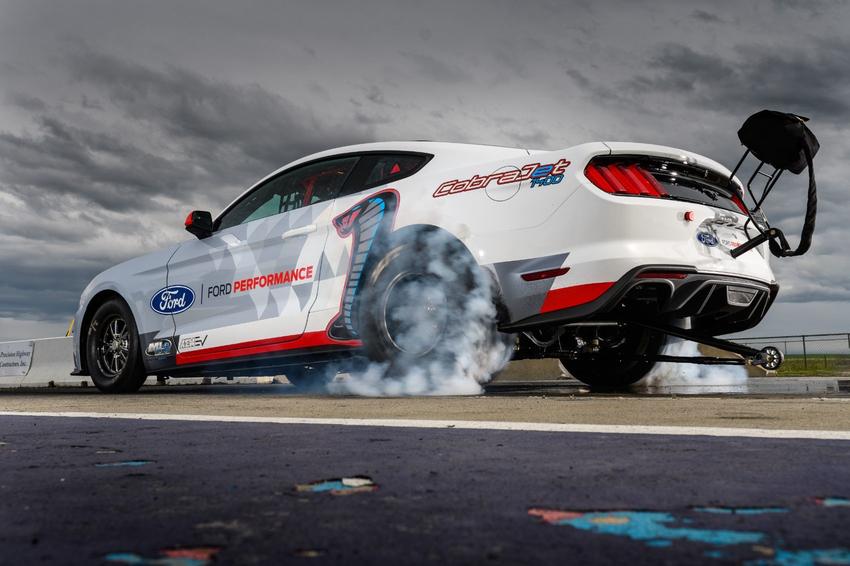 Ford Performance developed the Ford Mustang Cobra Jet 1400 prototype while also working on the Mustang Mach-E 1400 prototype; the Mustang-shaped SUV that’s also an EV. FoMoCo worked with Cascadia Motion on the Cobra Jet 1400’s powertrain. There are four PN-250-DZR inverters coupled to a pair of DS-250-115s handling four motors total, all spinning at up to 10,000 revolutions per minute.

These motor-inverter packages – sort of the electric equivalent of an engine/transaxle combination – run at 800 volts and up to 700 amps, with a maximum output of 350kW per motor. No wonder this thing is pulling low -8s, huh?

Ford Performance also teamed with AEM-EV to manage the propulsion package. They jointly developed an advanced data and control system with algorithms unique to the Cobra Jet 1400. And, as you’d expect, that steep amount of power has also required a different approach with chassis tuning. Ford’s build and integration collaborator, MLe, got tapped for that end of the project. The longtime Cobra Jet build collaborators over at Watson also helped with the project.

“It’s been a great but challenging project for all of us at Ford Performance,” Rushbrook added.

The Cybertruck seems to want to take on the F-150, so why not have the Model S and a Mustang going head-to-head? The Ford Mustang Cobra Jet 1400 prototype against something Tesla cooks up? So c’mon Elon, put your money where the ground is! Put up or shut up, but whatever you back off the trailer, remember these numbers: 1,502 horsepower, 168 miles per hour, and 8.27 seconds.