Home > Suv > Mustang Mach-E: In-depth understanding of all the buzz

Mustang Mach-E: In-depth understanding of all the buzz

Ford Mustang Mach-E is an all-electric SUV inspired by the famous pony car.

Forthcoming performance variants of the Mustang Mach-E will have more horsepower.

Well before the buzz started, the Ford Mustang Mach-E was being developed in a century-old brick building a few blocks away from Henry Ford’s original factory in Detroit. Ford is expanding the Mustang nameplate for the first time in over five decades, and hoping the Mach-E will make a lasting impact when it arrives in late 2020.

“At the first-ever Detroit auto show, Henry Ford said he was working on something that would strike like forked lightning,” said Bill Ford, Executive Chairman, Ford Motor Company. “That was the Model T. Today, the Ford Motor Company is proud to unveil a car that strikes like forked lightning all over again. The all-new, all-electric Mustang Mach-E.”

What Is The Ford Mustang Mach-E?

What Is The Range of The Mustang Mach-E?

How Much Power Does The Mustang Mach-E Have?

Mustang Mach-E: On The Inside

When Will The Mustang Mach-E Be Available?

What Is The Ford Mustang Mach-E?

The Mustang Mach-E is a new, all-electric SUV inspired by Ford’s famous pony car. Powered by permanent magnet motors, the Mustang Mach-E comes with standard and extended-range battery options with either rear-wheel or all-wheel drive. The Mustang Mach-E can receive over-the-air updates as they become available in order to improve performance over time.

Beyond the over-the-air updates, Ford says they have more than 2,100 EV-certified dealers and more than 3,500 EV-trained technician nationwide.

What Is The Range of The Mustang Mach-E?

With an extended-range battery and rear-wheel drive, the Mustang Mach-E is targeting an EPA-estimated range of at least 300 miles. Photo: Ford Motor Company.

How Much Power Does The Mustang Mach-E Have?

In extended-range all-wheel-drive, Ford is projecting 332 horsepower and 417 lb-ft. of torque. While it appears obvious Ford is after Tesla with the Mustang Mach-E, their immediate benchmark was actually Porsche. In an all-wheel drive configuration, Ford says they are aiming for better zero to 60 times than the base Porsche Macan. As one might expect with anything Mustang, the Mach-E will also have two higher-performance variants. 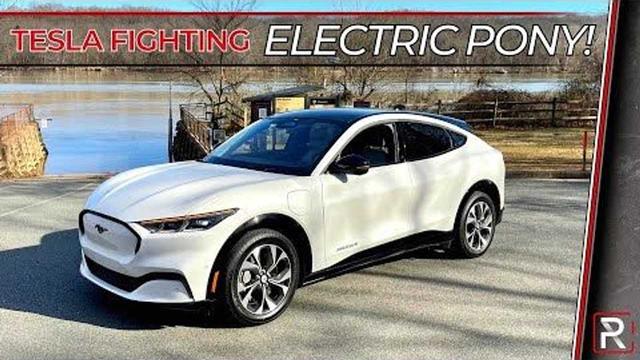 The Mustang Mach-E GT is targeting a zero to 60 time under four seconds, giving it an edge over the Porsche Macan Turbo. Meanwhile, the GT Performance Edition is seeking a zero to 60 time in the mid-three second range to rival the 911 GTS. Ford says, based on their computer and engineering simulations, both GT variants produce around 459 horsepower and 612 lb-ft. of torque.

“The Mustang Mach-E wholeheartedly rejects the notion that electric vehicles are only good at reducing gas consumption,” said Hau Thai-Tang, Ford’s Chief Product Development and Purchasing Officer. “People want a car that’s thrilling to drive, that looks gorgeous, and that can easily adapt to their lifestyle – and the Mustang Mach-E delivers all of this in unmatched style.”

Ford’s designers and engineers faced a number of challenges with the battery, including performance and placement. Using a new, purpose-built electric architecture, the battery resides on the floor between the Mustang Mach-E’s two axles. Ford says the placement minimizes cabin intrusion to allow for seating up to five, while also making it easier to assemble on the line.

Engineers worked the battery over in a battery of tests, some in temperatures as low as minus 40 degrees Fahrenheit. The Mustang Mach-E’s battery is secured inside a specially-constructed waterproof case surrounded by crash-absorption material. They are liquid-cooled to optimize performance in extreme weather and to improve charging times.

The Mach-E is the first production vehicle tuned by the Ford Performance team with the company’s racing simulator in North Carolina. From those sessions came the “Mach-E 4” all-wheel drive system, which Ford tested in a number of wet, slippery, and snowy conditions. Mach-E 4 applies torque independently to the front and rear axles for better handling and acceleration.

Depending on a driver’s mood, the Mustang Mach-E provides three different modes: Whisper, Engage, and Unbridled. They all seem fairly obvious as to what they do and it seems fairly obvious which one we would like. Each mode changes things with the Mustang Mach-E accordingly, from the steering and powertrain response, to the ambient lights and instrument cluster animations.

“Whether you want to really feel its performance capability or are looking for the quiet atmosphere that electric vehicles can offer, the Mach-E harnesses the power of electrification to create a unique driving experience while retaining that unmistakable Mustang feeling of freedom,” said Ted Cannis, Ford Enterprise Product Line Director, Global Electrification.

Related: The Mustang Lithium has a Beast mode and tons of power!

The Mustang Mach-E will be available with Brembo’s new Flexira aluminum calipers, which combine the functionality of a fixed caliper with the dimensions of a floating one. The GT Performance Edition comes with Ford’s MagneRide damping system.

Mustang Mach-E: On The Inside

Classic Mustang design cues like the double-cowl instrument panel are seen throughout the interior. Those traditional cues compliment the greener ones, like the available panoramic fixed-glass roof. It has a special coating with infrared protection to keep things cooler in the summer and warmer in the winter. In addition, an inner layer between the glass protects against UV rays.

Through a 15.5-inch touchscreen, drivers can access all the Mach-E’s functions and features using touch, swipe, and pinch controls. The touchscreen houses Ford’s new SYNC system with machine learning.

“Next-generation SYNC actively starts adapting to you as soon as you start using it, quickly learning your preferences and making personalized suggestions,” said Darren Palmer, Ford Global Director for Battery Electric Vehicles. “It can suggest going to the gym if it learns Mondays are workout days or calling home if you do that every day after work.”

When Will The Mustang Mach-E Be Available?

The Automoblog staff covers automotive industry news, trends, and technology along with new vehicle releases. Automoblog is owned and operated by Gearhead Media LLC., based in Detroit, Michigan and Berlin, Germany.