There will be 10 hybrid supercars in the next 5 years

hybrid But supercar market Mitsubishi
ZTSG 03/07/2022 New energy 82
Thanks to the US government for mandating the fuel consumption of the automobile fleet to reach 54.5 miles per gallon by 2025. The dawn of hybrid supercars is right before our eyes. At this point-alth...

Thanks to the US government for mandating the fuel consumption of the automobile fleet to reach 54.5 miles per gallon by 2025. The dawn of hybrid supercars is right before our eyes. At this point-although the naturally aspirated V12 and the naughty six-speed manual transmission will always dominate the entertainment sector, the hybrid system and dual-clutch transmission are technically superior. This is the fact.

Good news for us is that there’s a lot of well thought-out, high-performance hybrid supercars coming our way. Some are from automakers whom you may not have expected, and others have been in the business of speed for decades. Here’s 10 you might see on the market within the next five years:

Let’s start off with Tesla, everyone’s favorite electric car manufacturer (we know, not technically ”hybrid”). Now, rumors have been swirling for quite some time that Elon Musk wants a high-performance Tesla in the lineup. We even went so far as to mock one up for you all to see. But it’s still a ways off, and it’s still a lot of technology that the company may or may not already be invested in.

What can we say about the Mitsubishi Evo? It’s a great car. Mitsubishi as a whole in the US though? Not so much. They’ve pulled back a lot of product lately, and the remnants fail to meet any sort of desirable market.

But there’s hope for Mitsubishi yet. The Evo has and always will be a staple for the Japanese automaker, especially in the US. And as rumors fly of a hopped-up, 500+hp version of which on its way, it makes us feel that someone, somewhere in that company still cares about the enthusiast. 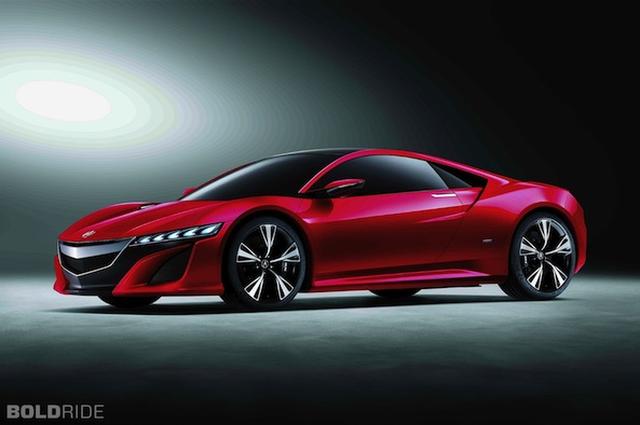 It’s been one of the most highly anticipated supercars in recent history. With big shoes to fill via its F1 counterpart, the McLaren P1 promises to be one of the most technologically advanced, highest performing supercars on the planet.

And with 903-hp, via a twin-turbocharged hybrid V8, how can you argue that?

If cool names measured the performance of supercars, this would be at the bottom. But thankfully, they don’t. Instead, the LaFerrari pushes out 950-hp via a 6.3-liter V12 and a hybrid KERS system. It also puts up an equally impressive $1.69M price tag.

The Audi R8 has always proven itself to be a worthy sportscar, teetering on the edge of supercar status. But come 2015 (or so), the new R8 will come loaded with nearly 600-hp via a hybrid powertrain, loads of carbon fiber about and a sexy new design.

Like a few others on the list, the Lexus LF-LC hasn’t actually been confirmed for production. But we’re not worried; with the LFA’s 500 model run and done, Lexus has already been hard at work on its replacement. The LF-LC could even lead to a downmarket Toyota-based supercar, if you catch my drift.

As with the P1 and the LaFerrari, Porsche pulled out the big guns to promote its latest and greatest 918 Spyder. And for good reason. It’s an $845K, 760-hp piece of hybrid engineering genius. And not to mention it gets close to 80 mpg.

Let’s face it- it’s been a long time coming for a new and improved GT-R. Not that there’s really anything wrong with the current one. But after a few rumors flew that the Nissan GT-R would be dead forever, more significant reports arose of a more powerful, hybrid version of the Godzilla supercar. When it will hit market though, is still a mystery.

We’ve seen pretty much all of the new Acura NSX so far (at least in concept form). And from what we can distinguish, it’s a damn fine looking and moving machine. It does the classic NSX right.

The Acura’s expected to hit market in 2015- along with many of its counterparts- and with it, a hybrid V6 worthy of everyone’s attention, as you can plainly see here.

We’ve looked at nine other high-performance vehicles already that are more than drool-worthy representations of the new hybrid supercar movement. But there’s one car that gets our blood pumping more than others. One car that brings back memories of mid-’90s sportscar stardom. The Supra.

And it’s coming to a dealer near you — at least, we hope it is. Rumors of a new Supra have been flying for years since it left the market for good back in 2002. But only lately have we seen some serious movements from Toyota and new CEO Akio Toyoda (a former racing driver dontcha know) furthering development on the sportscar/supercar ideals.

I hope that with the help of BMW and Lexus (or other methods), Toyota can truly realize the Supra project it has been talking about for a long time, and return to our hearts. Although equipped with 500 horsepower, all-wheel drive and hybrid power system.