Bentley Mulsanne 6.75 Edition engine
ZTSG 29/04/2022 Hatchback 211
As the times change—even if it’s for the better—we find ourselves wanting to say goodbye to old friends and favorites. This is exactly what happened in the bittersweet England Crewe in June. After ten...

As the times change—even if it’s for the better—we find ourselves wanting to say goodbye to old friends and favorites. This is exactly what happened in the bittersweet England Crewe in June. After ten years of passion for production, Bentley Mulsanne is indeed as good as ever. It still represents the highest pedigree of Bentley. However, Feichi is eager to have the opportunity to become a flagship, because Bentley hopes to create a new history from today.

“The Mulsanne is the culmination of all that we at Bentley have learned during our first 100 years in producing the finest luxury cars in the world,” explained Adrian Hallmark, Bentley Chairman and Chief Executive. “As the flagship of our model range for over a decade, the Mulsanne has firmly solidified its place in the history of Bentley as nothing less than a true icon.”

A New Era of Design

Bently has not forgotten the importance of the Mulsanne in their history and neither will the 30 lucky owners of the final examples. Throughout its decade-long-run, over 7,300 Mulsanne vehicles were handcrafted in Crewe.

During its production, three million cumulative hours went into crafting every last panel and placard. A million of those hours were spent on the interior while another 90,000 were allotted to polishing the cars before they rolled out to their new owners. Bently estimates this “labor of love” consisted of 42 million spot welds and another four million individual quality checkpoints.

“I am immensely proud of the hundreds of designers, engineers and craftspeople that brought the Mulsanne to life over the last 10 years,” Hallmark continued. “Now, as we begin Bentley’s journey to define the future of sustainable luxury mobility through our Beyond100 strategy, the role of Bentley flagship is passed to the new Flying Spur.”

Bentley employees in Crewe gather for a socially-distanced farewell for the Mulsanne. Photo: Bentley Motors. 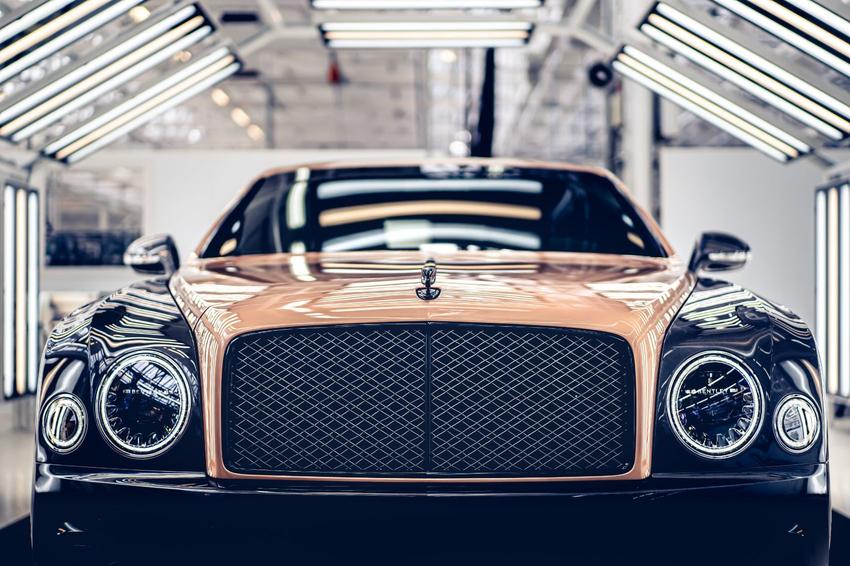 The Mulsanne showcased a new exterior and interior design, and a new chassis and body when it debuted at Pebble Beach in 2009. What still seems to stand out about that reveal – even today – is the Mulsanne’s twin-turbo 6.75-liter engine. Six years later, Bently relied on this engine to create the Mulsanne Speed, the second in what would later become three different Mulsanne variants (the third being the Mulsanne Extended Wheelbase limousine).

Related: “To build a fast car, a good car, the best in its class.” The story of W.O. Bentley.

The Bentley Mulsanne Speed used an upgraded version of 6.75-liter V8 engine with 537 PS (530 bhp / 395 kW) and 1,100 Nm (811 lb-ft.) of torque. Owners of this version now had selectable drive modes that changed up the parameters of things like the suspension and steering.

A New Era of Design

In 2016, a fresh Mulsanne line made waves in Geneva with its all-new interior and exterior designs. Bently revealed what they considered a modern and integrated appearance for their flagship car. Everything forward of the A-pillar was completely reimagined for a more streamlined look. Bentley’s engineers fashioned new designs for the fenders, bonnet, radiator shell, grilles, lights, and bumpers.

On the inside, updates included a new infotainment system and navigation as a nod to the modern aim of Bently at the time. Drivers of the 2016 version enjoyed redesigned seats, new door trim and armrests, and unique glass switchgear.

Under the bonnet of the Bentley Mulsanne 6.75 Edition by Mulliner, the engine intake manifold is finished in black instead of the traditional silver. The engine number plaque is signed by Bentley Chairman, Adrian Hallmark. Photo: Bentley Motors.

Now we arrive at the final 30 cars here in 2020, officially called the Bentley Mulsanne 6.75 Edition by Mulliner. The name doesn’t only represent the send-off of the Mulsanne but also the end of the engine’s production after 60 years. Subtle but unique styling cues for the Mulsanne 6.75 Edition by Mulliner include dark tint treatments for the Flying B bonnet mascot, 21-inch wheels with a bright-machine finish, and clock and minor gauges that feature cutaway drawings of the engine itself.

Even as the Flying Spur will be new and exciting, the clock in this final version sums up well why the Mulsanne was so special. But like all clocks eventually tell us: it’s time to move on.

Emily Pruitt is fascinated by the current changes in the automotive industry, from electric cars and infrastructure, to fully autonomous vehicles. Outside of the automotive world, she can be found writing poetry or unraveling the latest mystery novel.